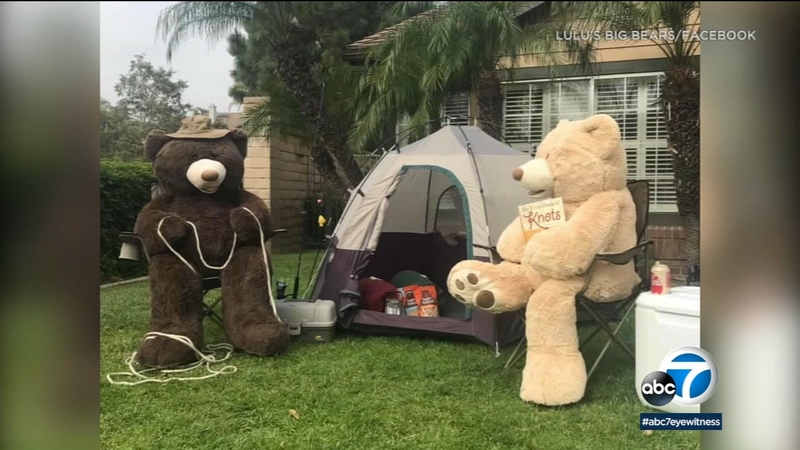 YORBA LINDA, Calif. (KABC) -- For the very last time, Yorba Linda resident Laura Snyder took her two jumbo sized bears out for a final scene on her front lawn. It's something she's been doing almost every day during the pandemic since a year ago Monday.

"This has been very emotional. Yesterday I was a wreck," said Snyder.

Yesterday, her family set up a big finale with costumes, props and some newer bears to mark the milestone.

"We had so many visitors and things would happen. One of the girls came up and hugged each of the bears goodbye and I'm standing in my living room. They can't see me. I'm crying. It's very emotional," she said.

She got the idea from the the city of Yorba Linda last year when residents were encouraged to display bears in their windows for a fun neighborhood bear hunt. In such dark times, her oversized bears became a ray of light for her community and on social media.

"We always kept everything positive. There's no COVID in the bear world. Sometimes some would say why aren't they wearing a mask? Well that's silly - bears don't wear masks. They also don't ride bicycles," she laughed.

For a year, the bears have been an escape from reality. Their hibernation symbolizes a reality that's a lot easier to deal with.

"It was a lot of 'let's move on, we have the vaccine now, things are opening up.' I thought, if we don't stop now, we won't have a stopping date. This is a good time to do it," said Snyder.

While it will be hard for Laura to say goodbye to doing this, it's not goodbye to the bears. The sign outside her house Monday had a quote from Winnie The Pooh saying "How lucky I am to have something that makes saying goodbye so hard."

"Winnie The Pooh is a cousin of the bears. And I thought I wonder if there's a Winnie the Pooh quote about a goodbye and I saw that and I thought, oh 'that's exactly, exactly how we feel,'" she said.