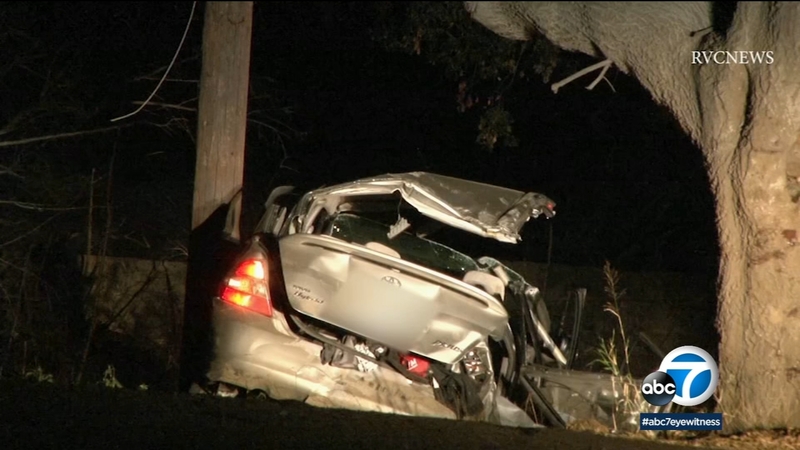 TEMESCAL VALLEY, Calif. (KABC) -- Three teenagers killed in a crash in Temescal Valley were identified after authorities say the vehicle they were in was intentionally rammed into by another driver.

The victims were identified as Drake Ruiz of Corona, Daniel Hawkins of Corona and Jacob Ivascu of Riverside. All victims were 16 years old. They attended different high schools - Santiago and Centennial in Corona and Woodcrest Christian in Riverside.

A memorial service was held at Northpoint Church in Corona on Monday for the three teens killed and three others injured in the wreck. The church says two of its families each lost a son in the crash and have one injured.

Ralph Valdez, a football coach for Hawkins at Santiago High School, posted condolences on Twitter and described Hawkins a "great soul" who worked each week to get better.

A suspect was arrested after a deadly crash in Temescal Valley where authorities say the man intentionally rammed a vehicle filled with teens.

Authorities are not sure if the teens used the car's seat belts, which only has five.

Chandra was arrested a short time later in a neighborhood near the crash site after the California Highway Patrol said a witness followed the suspect and helped authorities locate the vehicle.
"It was an intentional act," CHP Lt. David Yokley said at a news conference, although he did not disclose a motive. "Our investigation led us to believe Mr. Chandra intentionally rammed the Prius, causing the driver to lose control."

Chandra was booked on suspicion of murder with malice and assault with a deadly weapon. Authorities say he is also facing a pending misdemeanor spousal battery case from four months ago.

CHP officials said Monday there was no immediate word on what may have prompted Chandra to ram the teens. Ruiz's mother told reporters Monday night the teens, who were on their way to a sleepover to celebrate Ivascu's birthday, tried to play a "ding-dong-ditch"' prank -- ringing a doorbell and quickly driving away -- at a friend's home, but Chandra answered the door, got into his Infiniti and chased the teens.

"The boys were playing ding-dong-ditch at a house they thought was ... somebody their age, but it turned out to be that angry man,'' Debbie Ruiz said.

She said when Chandra began chasing them, "they fled for their lives basically.''

"They were scared to death, tried to get away several times,'' she said. He rammed them, ran them off the road.''

A memorial with flowers and candles has been growing at the site of the crash. Local residents, even those who did not know the teens, were paying their respects and mourning the loss for such an apparently senseless reason.

"There are lives that didn't have a chance to succeed doing something," said James Meador of Temescal Valley. "Being great, being the next president, being the next inventor. They never had a chance because of somebody's blind rage."