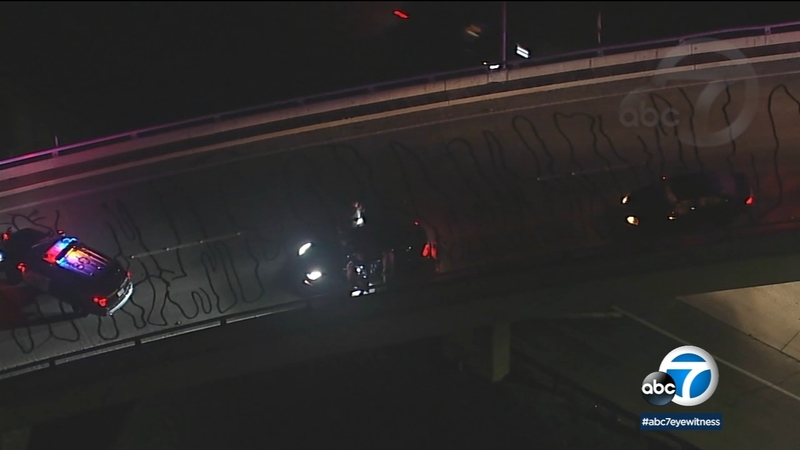 GLENDALE, Calif. (KABC) -- Dispatch audio is revealing new details about the moments leading up to Thursday night's arrest of an apparently passed-out driver behind the wheel of a Tesla on Autopilot that was traveling on a freeway overpass in Glendale.

The chaotic scene unfolded after 11 p.m. as a woman suspected of DUI and apparently passed out was being followed by the California Highway Patrol, with officers attempting to get the car to stop.

The Tesla was going at slow speeds and came to a standstill near the 134 and 5 freeways after a CHP vehicle stopped directly in front of it.

In radio transmissions of the incident that were later obtained by ABC7, a dispatcher is heard saying: "The reporting party is advising that his wife is unconscious in a Tesla. The vehicle is driving itself.

"It ended up TC'ing into the right shoulder wall, and, uh, still continuing," the dispatcher says, using shorthand for a traffic collision.

A DUI suspect was taken into custody after her Tesla vehicle that was reportedly on Autopilot stopped on a freeway overpass in the Glendale area.

The dispatcher is heard saying the suspect's husband was following the Tesla in a Volkswagen.

"Again, apparently the wife is unconscious in the vehicle," the dispatcher adds.

"And I guess there's vehicles in front of it, that's what's causing the vehicle to slow down."

CHP officers got the Tesla to stop and woke the driver up, got her out, and conducted a DUI test. CHP said the driver, identified as Karla Villanueva, 31, was arrested on suspicion of DUI and booked into the Metropolitan Detention Center Jail.

Autopilot has frequently been misused by Tesla drivers, who have been caught driving drunk or even riding in the back seat while a car rolled down a California highway.

Video shows a driver who appears to be sleeping in his car and going 75 miles per hour in a Tesla that's on Autopilot on a Los Angeles area freeway.

The electric vehicle maker uses a camera-based system, a lot of computing power, and sometimes radar to spot obstacles, determine what they are, and then decide what the vehicles should do. But researchers say it has had trouble with parked emergency vehicles and perpendicular trucks in its path.

The National Highway Traffic Safety Administration opened the Tesla probe after tallying 11 crashes since 2018 in which Teslas on autopilot or cruise control have hit vehicles where first responders have used flashing lights, flares, an illuminated arrow board or cones warning of hazards.

In those crashes, 17 people were injured and one was killed, the NHTSA said. An investigation could lead to a recall or other enforcement action.

Overconfidence in Autopilot is, at the very least, strongly discouraged by NHTSA. A spokesperson told Eyewitness News in part:

"Certain advanced driving assistance features can promote safety by helping drivers avoid crashes and mitigate the severity of crashes that occur, but as with all technologies and equipment on motor vehicles, drivers must use them correctly."

The National Transportation Safety Board, which also has investigated Tesla crashes, has recommended that NHTSA and Tesla limit the autopilot's use to areas where it can safely operate. It also recommended that Tesla be required to improve its system to ensure drivers pay attention.

Last year the NTSB blamed Tesla, drivers and lax regulation by NHTSA for two collisions in which Teslas crashed beneath crossing tractor-trailers.