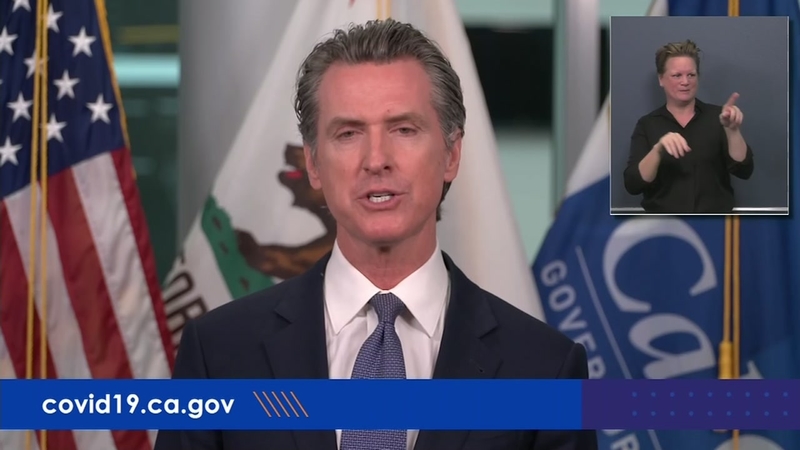 "If anyone is arrested, I ask that it only be me," he tweeted.

Tesla is restarting production today against Alameda County rules. I will be on the line with everyone else. If anyone is arrested, I ask that it only be me.

Tesla released safety guidelines and a daily self-health checklist for employees, which includes employee temp checks. However, it sounds like some employees will have to make or bring their own PPE.

Governor Gavin Newsom responded Monday to Tesla CEO Elon Musk's earlier comments about possibly moving his car manufacturing plant out of Fremont to another state due to California's shelter-in-place restrictions.

Newsom was asked if his administration considers car manufacturing to be an essential part of the economy during this time and whether he thinks Tesla should be allowed to reopen with proper safety guidelines in place to resume manufacturing.

Here’s a look at the Safety Guidelines and daily Self Health Checklist in @Tesla’s ‘Return to Work Playbook’.
Sounds like employee temp checks are happening. But it sounds like some employees will have to make or bring their own PPE... @abc7newsbayarea https://t.co/PJ60804m53 https://t.co/5yNrVOCduH pic.twitter.com/5diI3jsUk6

"In the state of California, we have made meaningful modifications on manufacturing and logistics, including, on the front end, car dealers that go back many, many weeks, modifications were made earlier on in that space. We recognize localism, both from a county, previous questions about if a county wants to go further, and other counties that don't want to even go as far as the state, which is the case in Alameda County. My understanding is they have had some very constructive conversations with the folks at that facility, the county health director. They're working to focus on the health and safety of the employees at that facility. My belief and hope and expectation is as early as next week, they will be able to resume," he said.

"Manufacturing broadly throughout the state of California is no longer restricted with modifications."

Treasury Secretary Steven Mnuchin is siding with Musk over the reopening of the company's Fremont plant. Mnuchin urged the state to prioritize the 'quick' and 'safe' opening of the manufacturing facility.

Appearing on CNBC by phone on Monday Secretary Mnuchin said, "I agree with Elon Musk. He's one of the biggest employers and manufacturers in California, and California should prioritize doing whatever they need to do to solve those health issues so that he can open quickly and safely."

Mnuchin is siding with Musk after the CEO threatened to move the company's Palo Alto headquarters and Fremont plant with 10,000 employees out of the state of California in a tweet over the weekend.

Frankly, this is the final straw. Tesla will now move its HQ and future programs to Texas/Nevada immediately. If we even retain Fremont manufacturing activity at all, it will be dependen on how Tesla is treated in the future. Tesla is the last carmaker left in CA.

Musk said in a tweet Alameda County is "acting contrary to the Governor, the President, our Constitutional freedoms & just plain common sense!"

Tesla is filing a lawsuit against Alameda County immediately. The unelected & ignorant “Interim Health Officer” of Alameda is acting contrary to the Governor, the President, our Constitutional freedoms & just plain common sense!

On Saturday, Musk filed a federal lawsuit seeking a court injunction on the health order governing Alameda County where the Fremont plant is located. If granted, the injunction would allow the plant to reopen after a closure stretching seven weeks.

On Friday, Bloomberg reported the CEO was preparing to open the Fremont plant in defiance of the county's order.

Alameda County in a statement confirmed Friday that Tesla cannot open under the current health order.

"All businesses within the County must comply with the May 4th Health Officer Order and if a business does not meet the limited criteria stated in that Order to reopen, then they are out of compliance. Tesla has been informed that they do not meet those criteria and must not reopen. We welcome Tesla's proactive work on a reopening plan so that once they fit the criteria to reopen, they can do so in a way that protects their employees and the community at large," an Alameda County spokesperson told ABC7 on Friday.

The county said Saturday communication with Tesla "has been a collaborative, good faith effort to develop and implement a safety plan that allows for reopening while protecting the health and well-being of the thousands of employees who travel to and from work at Tesla's factory."

Fremont's mayor responded to Saturday's developments, encouraging the county to work with businesses to reopen the economy.

In a statement, Mayor Lily Mei said in part, "As the local shelter-in-place order continues without provisions for major manufacturing activity, such as Tesla, to resume, I am growing concerned about the potential implications for our regional economy. We know many essential businesses have proven they can successfully operate using strict safety and social distancing practices. I strongly believe these same practices could be possible for other manufacturing businesses, especially those that are so critical to our employment base."

The mayor also said the city is committed to a "balanced approach" to resuming operation.

"The City encourages the County to engage with our local businesses to come up with acceptable guidelines for re-opening our local economy. As we have done for over a decade, the City is prepared to support Tesla as soon as they are able to resume automobile manufacturing operations and are committed to a thoughtful, balanced approach to this effort that remains safe for our Fremont community," she said.