Businessman Rande Gerber steps in to help SoCal veteran who was scammed out of more than $3,000 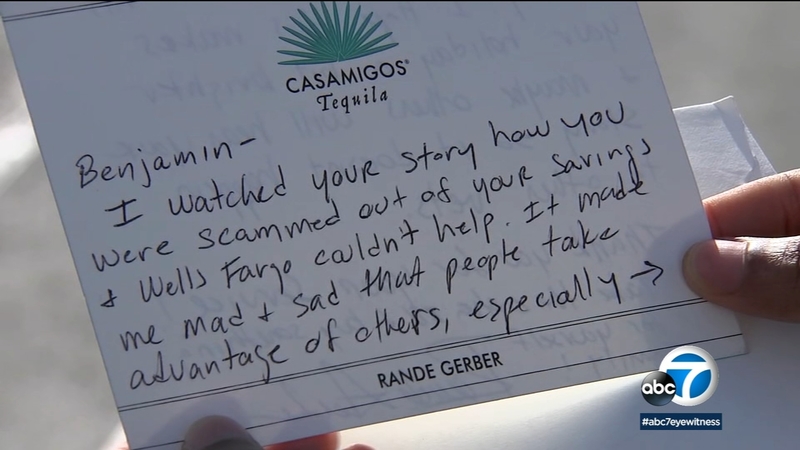 Benjamin Gardner was simply stunned when he sees the gift he received from a celebrity benefactor to help him get through during the holidays.

Gardner's plight started with a text message that appeared to come from Wells Fargo, alerting him of a charge of $202.08.

As it turns out it, the text was sent by a scammer who then called Gardner. Apparently the scammers were able to spoof their caller ID number to pretend it was Wells Fargo. They were then able to clean out Gardner's bank accounts, stealing $3,400 dollars.

Security experts say the scam has been happening more and more often.

"When this person told me to check the number, I bounced it off the website and it for sure said Wells Fargo," Gardner said.

ABC7's report about Gardner struck a chord with Rande Gerber, the A-list entertainment industry businessman who founded Casamigos Tequila, along with his friend, actor George Clooney.

Gerber reached out and asked ABC7 to give him an envelope with a surprise -- check to cover his losses and a little extra, as well as a personal handwritten note.

Gardner read the card aloud: "It made me mad and sad that people take advantage of others, especially a Navy vet that served his country. I hope this makes your holiday a bit brighter and maybe others will hear your story so that it doesn't happen to other vets. Thank you for your service. PS: Take extra care and buy something nice for your self and your family."

Gardner said the gift would cover what he lost and more. Now he wants to help others.

Referring to the check from Gerber, he added: "This right here will give me the ability to make someone else happy, so I'm going to pay it forward."