Colton chases after love in part 1 of 'The Bachelor' finale 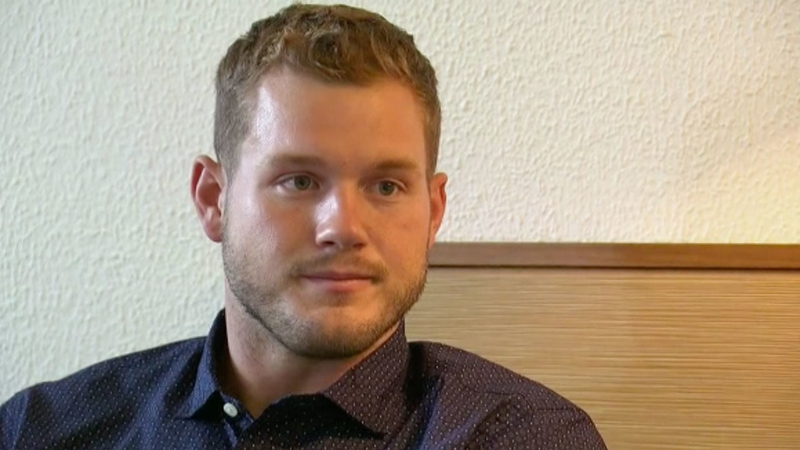 NEW YORK -- The finale picked up right where last week left off, with Colton our "Bachelor" running through Portugal in the dark. Chris Harrison chased after Colton and followed the sounds of barking dogs. They asked strangers if they had seen him and eventually got in some vehicles to start looking for him. The producers noted that he even ripped his microphone off. It was 11:40 p.m. at the time. Chris Harrison started to get genuinely worried and said if they didn't find him within the next 20-30 minutes they would have to call the police. The producers eventually saw someone walking down the street and low and behold it's Colton. There was a mad scramble and a female producer chased after him. He was really upset and told her not to touch him. He said he wasn't ok and he was very, very angry. Chris Harrison caught up to Colton and he refused to stop walking. Colton said he wanted to be done, done. He stood on the side of the street crying and said, "I've been through enough, not knowing that I'm enough, and every reminder of that just makes me stronger, so I'm ok with it." He told Chris Harrison that every time he puts himself out there he gets rejected. Chris reminded him about Tayshia and Hannah, but Colton said again that he couldn't do it anymore.

The next morning, Chris Harrison went to Colton's hotel room. Colton said that he was falling in love with Tayshia and Hannah at one point, but Cassie shut his heart off for them. He said that he wants to give Cassie everything she wants. He feels like if he breaks up with the other two she'd be into him and that she's just scared. Chris Harrison asked what we've all been thinking: "So what if she's just not that into you?" Colton said he's a good judge of the situation and he thinks that Cassie loves him. He said that he's ready to fight for someone that he loves.

Before he could do that, Colton had to break up with Tayshia and Hannah. Tayshia was up first. Colton started crying and then told her that he just wanted to respect her and be honest with her, and although he was falling for her he knows that he can't love two people and his heart is with someone else. He flat out said, "I love Cassie." He told her that he was sorry and she didn't deserve this, to which she asked if they could talk without the cameras. Of course, they forgot to turn their microphones off. Colton started to cry a whole bunch. Tayshia started to sob and said, "I don't want to go through this, I don't want to." It ended on a high note though, she called him a "good guy" and they parted ways.

On the live portion of the show, Tayshia talked about how hurt she was by their breakup and that she took their relationship very seriously. Then she and Colton saw each other for the first time since their breakup. They hugged and then they both said they were "good." She asked him what was missing and Colton said that they had great memories and a wonderful foundation, however, he said when he felt he gave all of himself to Cassie it closed him off to the other relationships. Tayshia told Colton that she wished the best for him and that was about it.

Back in Portugal, Colton continued his trail of misery at Hannah's room. Sadly, Hannah thought she was about to have a wonderful overnight date with him, and boy was she wrong. As heartbroken as Colton is, he went and broke two girls hearts, plus the many others' in previous weeks. Hannah was so excited to see him, but then her face quickly changed. He quickly told her that he couldn't be in love with two people and he was in love with Cassie. Colton told Hannah he didn't expect to have things "be like this." He even said, "I thought it was going to be you. You still remind me of home." She shook her head in disbelief. She asked him what didn't work and he told her that it's hard because he doesn't have an answer to that. Hannah told him that she was going to tell him she loved him in the gift she was making. She wanted to leave because she was so embarrassed. She said that she was surprised that he would want to do this to her, and that made Colton cry. He said it was the last thing he'd want to do to her. She really piled it on when she said her whole family was excited and she was ready to move to be with him. He said, "What the bleep am I doing? I don't want to lose you. I don't know if I'm making the right decision." Yikes, um what? He told her that he wasn't sure if he was making the right decision but he hoped that he was. He gave her a hug, she cried, and he told her, "You don't deserve to be somebody's backup plan, you don't deserve to be second." "I didn't want to leave here without you," Hannah said through sniffly tears. It was really hard to watch. Colton cried in the hallway and then hugged a producer as he sobbed and said, "I'm scared." Then he added, "I don't know if I'm giving up a for sure thing for something that isn't possible. It's how much I love Cassie that I'm willing to walk away from someone that great."

Hannah was out on stage during the live show and she said it was really hard to see Colton cry so much after their breakup. She said that she let herself feel the feelings because Colton told her that she "reminded him of home." She said any doubts she had, that was always her safety net. She said when he used it during their breakup it became meaningless. She said that watching the show has only made her more confused. Colton came out on stage and she told him that she loved him and thought that he felt the same. She wondered why she wasn't given the final date, and Colton said that he just wasn't open to love with her anymore because his heart was with Cassie. She asked if things would be different if they had more time. Colton said that up until Fantasy Suite week he was playing by the "rules of the show" and he said he just couldn't anymore because his feelings were just stronger for someone else. She said what Cassie did to you is what you did to me. Poor Hannah had hoped that he would chase after her. She said it felt like a slap in the face when he told Cassie that he thought about her when he was on dates with other people. Colton admitted that it was just how he felt.

Chris Harrison joked that there are no women left on the show, so they invited Garrett, Jason, Ben, and Blake out on the stage. Seriously? We want to see Colton chase Cassie. They all talked about how hard the last few days of the show are and how intense it gets. Garrett and Becca are still going strong, so there's one bit of good relationship news.

Back in Portugal, Colton admitted that all the women are gone and the show is more or less over. But, he's ready to put up a fight for Cassie. They showed Cassie packing her bag in her hotel room where she said that she wasn't ready for a lifetime commitment just yet. She said she wants to just go home and move on with her life. She couldn't take the pressure of him missing out on getting engaged because of her, so that's why she left. "I came here for love, and I love somebody," Colton said. He got in a car and he said he's "willing to do anything and everything because that's how much I love Cassie." Knock, knock...and the episode ends. Thanks for nothing Chris Harrison. HA! We'll get the answer to what happens after that dramatic knock Tuesday night. We're also going to find out who our next "Bachelorette" is! Don't miss it!
Report a correction or typo
Related topics:
arts & entertainmentcolton underwoodabc primetimebachelorthe bachelorcominguproseschris harrison
Copyright © 2022 KABC Television, LLC. All rights reserved.
COMINGUPROSES
Clayton and Susie 'never say never' to a future 'Bachelor' appearance
Clayton's journey ends with an unexpected twist on 'The Bachelor'
Rachel and Gabby will both be 'Bachelorettes' on the same season
Gabby, Rachel endure 'Bachelor' Clayton's 'Rose Ceremony From Hell'
TOP STORIES
Villanueva's former top aide admits belonging to alleged deputy gang
UPS driver, 24, collapses, dies in SoCal heat
New Glassell Park restaurant at center of gentrification debate
14 suspects grab and run out with merchandise from Century City mall
Fewer young Americans want to serve, due to obesity fewer qualifies
4th of July fireworks in Southern California: Where to watch
Teen girl speaks out after surviving shark attack at Florida beach
Show More
Experts set expectations about 'vaccine efficacy'
Disneyland replacing Splash Mountain with Tiana's Bayou Adventure
New California laws on bars, ghost guns, schools taking effect
On The Red Carpet previews hot movies, shows for July
VP Harris expected to discuss Roe overturn at Essence Festival
More TOP STORIES News