A mostly peaceful demonstration Saturday near The Grove and Rodeo Drive devolved in the afternoon when protesters set a Los Angeles Police Department kiosk and several vehicles on fire, broke store windows and covered buildings with graffiti.
KABC 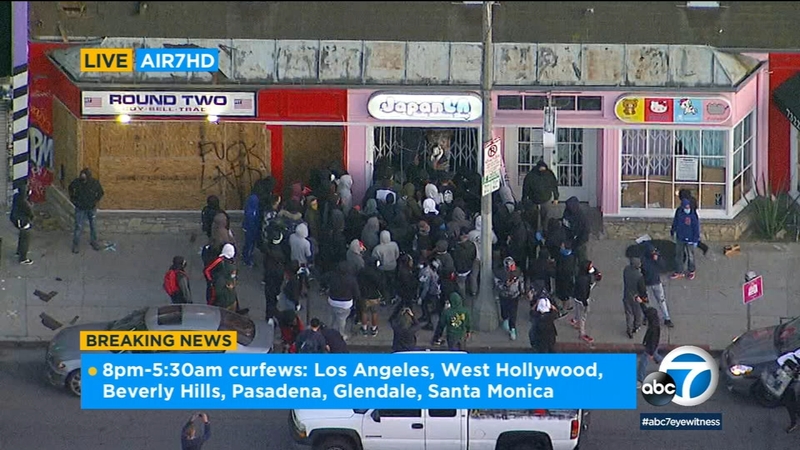 LOS ANGELES (KABC) -- After a night of violence in downtown Los Angeles that led to 500 arrests, a mostly peaceful demonstration Saturday near The Grove and Rodeo Drive devolved in the afternoon, with protesters setting a Los Angeles Police Department kiosk and several vehicles on fire, breaking store windows and covering buildings with graffiti.

Thousands of demonstrators descended on the Fairfax District and Beverly Hills as part of a series of protests over the in-custody death of George Floyd, committing multiple incidents of vandalism.

Chaotic scenes erupted across the area. Looters were seen destroying an ATM on Melrose Avenue, which was eventually taken away by a group of looters, as a fire burned about a block away near the Adidas store. Others were seen smashing store fronts, including at least one person who took a hammer to a store window.

Just before 7 p.m., police responded to the Nordstrom store at The Grove in Los Angeles after it was broken into. A skirmish erupted between police and protesters in front of the store.

Police quickly moved protesters out of the area, with some officers using non-lethal weapons. AIR7 HD was over the scene as several people were seen running out of the store.

A kiosk for the LAPD at The Grove was set on fire, and thick plumes of smoke were seen shooting into the sky.

The Ray Bans store was seen with shattered glass.

A mostly peaceful demonstration Saturday afternoon near Rodeo Drive spiraled into an evening of chaos as protesters looted and damages stores on Rodeo Drive, breaking store windows and covered buildings with graffiti.

Stores on Rodeo Drive, like other nonessential stores throughout the state, have been closed since early March due to stay-at-home orders related to the coronavirus pandemic.

The city announced around 2 p.m. Rodeo Drive was closed to vehicular and pedestrian traffic.

Mayor Eric Garcetti announced a curfew for Saturday night in Los Angeles for 8 p.m. to 5:30 a.m. The cities of Beverly Hills and West Hollywood also enacted a curfew due to safety concerns.

The curfew requires everyone within the city of Los Angeles to stay indoors.

The Beverly Hills Police Department deployed extra staffing throughout the city and will be highly visible while enforcing the curfew, Mayor Lester Friedman said.

Shortly before 4 p.m., automated telephone calls were made to Beverly Hills residents saying protesters are entering the city and urging residents to
stay to home and motorists should avoid the area.

The Beverly Hills City Council held what it described as an emergency meeting to discuss the current ongoing civil unrest within Los Angeles County'' earlier Saturday.

The death of the 46-year-old Floyd, who was recorded on video pleading for air as a white officer pressed a knee on his neck, has shocked the country and produced violence in numerous cities. Police chiefs and police unions have called it unjustifiable and excessive force. Former Minneapolis Police Department officer Derek Chauvin has been charged with murder.