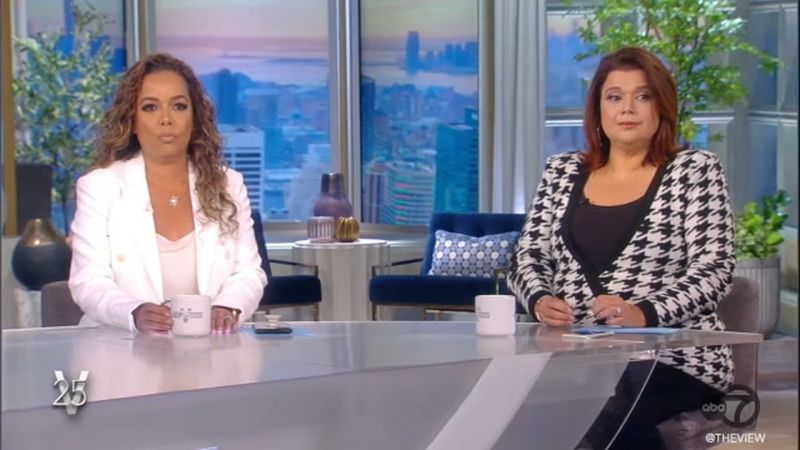 NEW YORK -- It now appears the COVID-inspired chaos on Friday at 'The View' may have been in part to false-positive test results.

Host Ana Navarro said on CNN Friday that she has taken two tests after being whisked off the set, and both came back negative.

The panelists were moments away from introducing Vice President Kamala Harris to the show for an in-person interview in their New York City studio.

Co-host Sunny Hostin and guest host Ana Navarro were asked to leave the anchor desk in the middle of the live show, and the remaining anchors subsequently explained that Hostin and Navarro had tested positive.

Sunny Hostin and Ana Navarro were removed from the set of 'The View' after testing positive for COVID-19 ahead of an interview with Kamala Harris.

Hostin has not commented publicly on her subsequent test results.

Harris, who had planned to join the table, was instead interviewed remotely from another room inside ABC's building about 10 minutes before the show wrapped. "The View" has invited her to return.

"We did everything we could to make sure you were safe because we value you so much," host Joy Behar said after welcoming Harris.

.@VP Harris: "Sunny [Hostin] and Ana [Navarro] are strong women and I know they're fine, but it really also does speak to the fact that they're vaccinated and vaccines really make all the difference because otherwise we would be concerned about hospitalization and worse." pic.twitter.com/m5NMwT5dk8

"Sunny and Ana are strong women, and I know they're fine," the vice president responded. "It really does also speak to the fact that they're vaccinated. Vaccines really make all of the difference because otherwise, we'd be concerned about hospitalization and worse."

Behar and Sara Haines, the other remaining host, then briefly discussed the pandemic, border patrol, Afghanistan and abortion laws with Harris before the show's end.

Harris did not interact with Hostin or Navarro before the show, according to a White House official. Both hosts are fully vaccinated, their colleagues said.

Two hosts of ABC's "The View" were pulled from set during the show's live broadcast Friday after learning that they tested positive for COVID-19.

After "The View" returned from commercial break around 11:15 a.m. ET, Behar told viewers that there "seems to be something happening here that I'm not 100% aware of."

"Can someone please apprise me of the situation?" Behar said.

"I need the two of you to step off for a second," a person speaking off-camera told Hostin and Navarro.

Behar then resumed introducing the vice president but was told to stop.

"Let's do a tap dance," she joked before tossing to a commercial break.

Once back on air, Behar and Haines explained the situation and speculated that Hostin and Navarro had breakthrough COVID-19 cases.

"There's never a dull moment in television ... but this is a new one," Behar said.