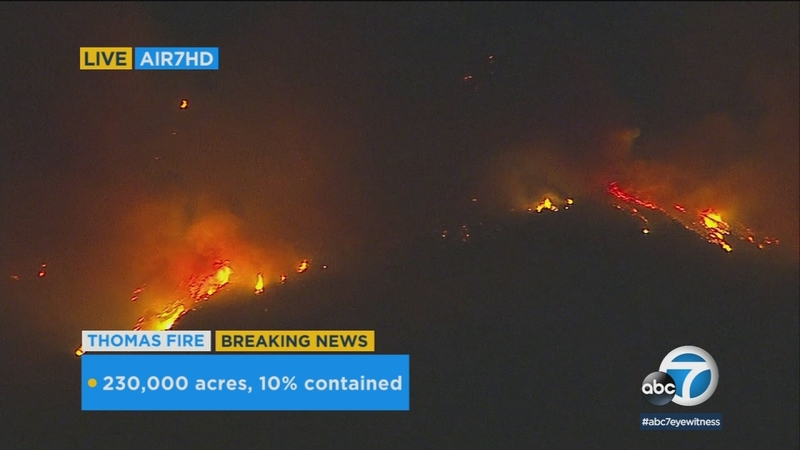 The new acreage figure moved the Thomas Fire from the 10th largest wildfire in California history to the fifth largest, according to Cal Fire - even as it continues to grow.

It is also at least the 10th most destructive in California history, after destroying 790 structures and taking one life.

The massive brush fire prompted evacuations for parts of Montecito, Summerland and Carpinteria Sunday morning as the blaze grew from 155,000 acres to 173,000 overnight, then hit 230,000 later Sunday.

It also impacted electrical lines in the area, leaving at least 85,000 Santa Barbara residents without power.

Some people were woken up around 3 a.m. and told to leave their homes immediately.

"I'd never even imagine that this was going to ever happen to us. That this would come this close to us. So many people have lost their homes all up and down the coast. It's frightening," Debbie Stevens said.

The fast-moving fire started Monday night in the Steckel Park area of Santa Paula. Within a few hours it ripped through the area and headed into Ventura, prompting thousands of evacuations and destroying hundreds of homes. So far, at least 710 structures were destroyed in the fire, with 162 left damaged.

More than 4,400 firefighters were battling the blaze. Still, at least 15,000 structures are threatened by the fire.

One person died in a car crash connected to the fire. Authorities said the 70-year-old Santa Paula woman was fleeing from the blaze when she got into the fatal crash.

Gov. Jerry Brown, who declared a state of emergency for the area, toured the ravaged neighborhoods Saturday. He said the deadly and destructive wildfires that have plagued Southern California may be "the new normal."

Much of Southern California remains under a red flag warning as several brush fires burn in the region.