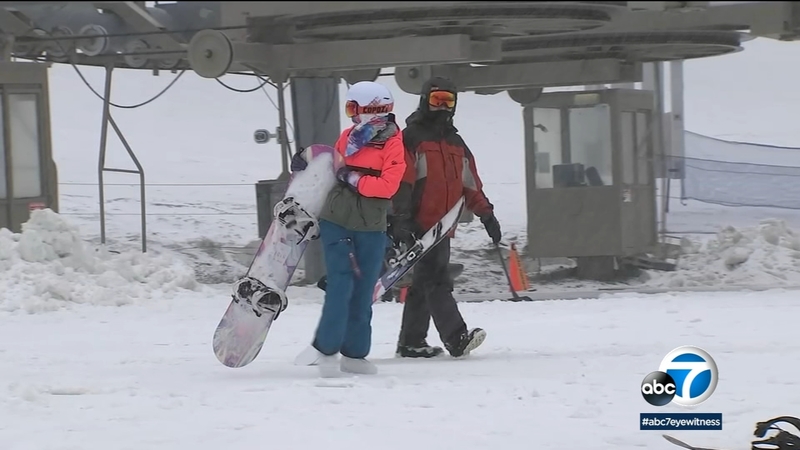 An unusual thunderstorm that produces snow instead of rain is known as "thundersnow."

Two to three inches of snow fell Tuesday afternoon over Mountain High in Wrightwood located in San Bernardino County. People quickly got up to the resorts to enjoy the snow.

National Weather Service forecasters said the changing conditions were thanks to a cold low-pressure system that moved into the region from Northern California following a week of summer-like heat in the Southland.

"Rain and high-elevation snow is becoming more widespread this afternoon. You may even hear rumbles of thunder over the next few hours - I'M LOOKING AT YOU, THUNDERSNOW," tweeted NWS-San Diego.

NWS also says that a strong cold front in San Bernardino County will lower "snow levels down to 4,500 feet, small hail, and brief heavy snow expected to impact to Highways 330, 18, and 38 through 5 p.m."

A strong cold front bringing a band of precipitation across the San Bernardino mountains and lowering #snow levels down to 4500 feet, small hail and brief heavy snow expected with impact to Highways 330, 18 and 38 through 5pm, a thunderstorm and brief heavy rain for lowland #cawx pic.twitter.com/rbEQlcZR3Y

And indeed, the blast of wintry weather continued to cause big trouble out on mountain roads.

In San Bernardino, Highway 18 was closed in both directions at Waterman Canyon due to the snow conditions. Several cars were seen stuck on the side of the road.

In Lake Arrowhead, snow plows were working to clear the streets. At least one accident was reported up in Crestline.

Hail hit certain parts of L.A. County, such as in Pasadena where the area surrounding the Rose Bowl looked like a winter wonderland.