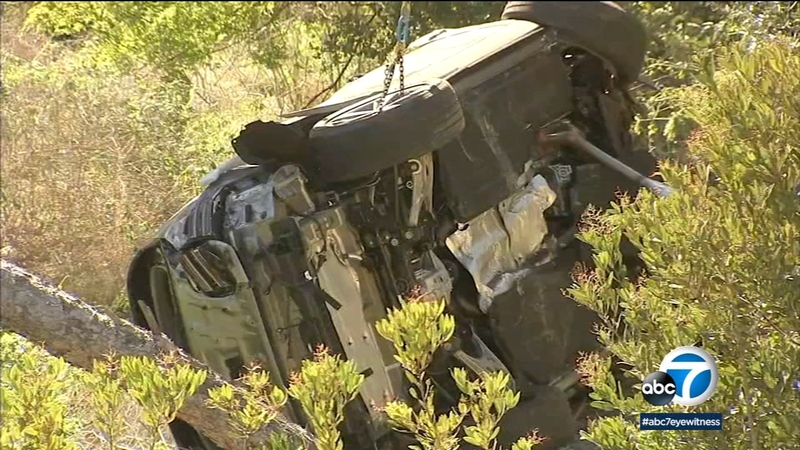 What we know about Tiger Woods' crash and how it unfolded

No other cars were involved in the wreck that injured Woods. The golf star was the only person in the 2021 Genesis GV80, which sustained major damage, and he was extricated from the wreck by L.A. County firefighters and paramedics. He was taken to a local trauma center in serious but stable condition.

Sources tell ESPN that Woods has crush injuries of both lower legs, including a compound fracture and a shattered ankle. He underwent hours of surgery.

Late Tuesday night, the Tiger Woods Twitter account released a statement from an official at Harbor-UCLA Medical Center describing his injury and the surgery.

The statement from Dr. Anish Mahajan, chief medical officer and interim CEO at Harbor-UCLA, said Woods "suffered significant orthopaedic injuries to his right lower extremity." Rods, pins and screws were used to stabilize the bones in his foot and ankle.

"He is currently awake, responsive, and recovering in his hospital room," the message from TGR Ventures said.

A statement on Tiger Woods' Twitter account said he was awake, responsive and recovering. A doctor at Harbor-UCLA Medical Center said Woods shattered tibia and fibula bones on his right leg in multiple locations.

While the cause of the accident is being investigated, the sheriff's department said there was no obvious indication of a DUI. Among the other factors that will be investigated are speed and possible distractions such as cellphone usage but it was too early at this point to determine if either of those were issues, officials said.

Woods crashed first into a sign that welcomes visitors to Rolling Hills Estates in the center median. His vehicle than crossed over lanes on the other side of the road, hit another sign and a tree before rolling over into the brush, officials said.

According to Golf Digest, also owned by Discovery, the TV shoot was for on-course lessons to celebrities, such as Spade and retired basketball star Dwyane Wade. He did not play. Woods was believed to be headed to play golf and do a photo shoot Tuesday with NFL quarterbacks Drew Brees and Justin Herbert, a source tells Eyewitness News.