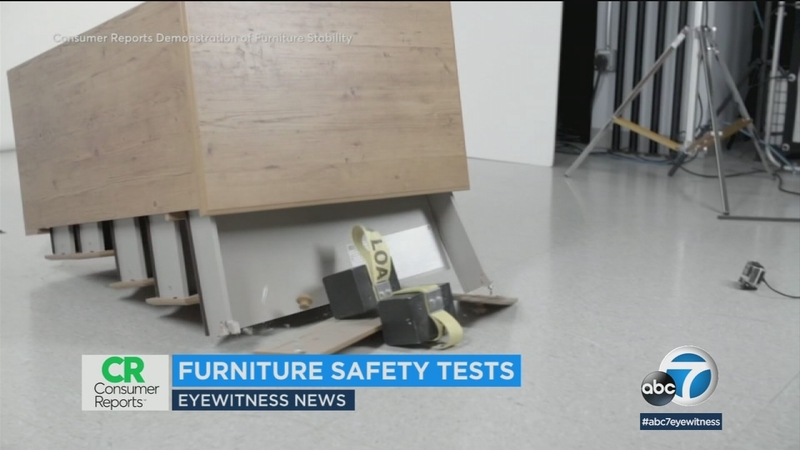 The numbers are frightening: Every 17 minutes someone is injured by furniture, a TV or an appliance tipping on them, and about every 10 days a child dies from a tip-over incident.

Parents might be surprised to learn that furniture, including dressers, are not required to be tested before they are sold. As exclusive new Consumer Reports testing reveals, there are big differences when it comes to dresser stability.

It's something Janet McGee knows all too well.

"When I opened the door even further, right in front of me was his dresser that had fallen forward, and immediately, 'Oh my God, it is so quiet in here, he has to be under it,'" McGee said.

Her 22-month old son Ted suffered fatal injuries when a dresser fell on top of him.

The numbers are frightening: Every 17 minutes someone is injured by furniture, a TV or an appliance tipping on them, and about every ten days a child dies from a tip-over incident.

"I remember having the thought of, 'I hope this is a dream, but I know this isn't a dream,'" the mother recalled.

The dresser that killed Ted was an IKEA Malm. Ikea later recalled the dresser and has since changed its design. The company did not respond to requests for comment about the incident involving Ted McGee.

How stable are new dressers currently on the market?

Consumer Reports bought 24 models from different furniture manufacturers, then evaluated them based on three different tests.

Thirteen dressers passed all the tests, while 11 failed at least one test.

So how can consumers know if a dresser in their home is secure?

"That's the thing about all of this," said James Dickerson, Consumer Reports' chief science officer. "You can't tell a dresser by just, whether it's going to be tipsy, just by looking at it."

Which is why Consumer Reports is pushing for mandatory safety standards and says all furniture should be properly anchored to a wall. Janet McGee agrees and says manufacturers should also design and build safer furniture.

"I should be able to purchase something, and put it in my child's room, and it be safe," she said.