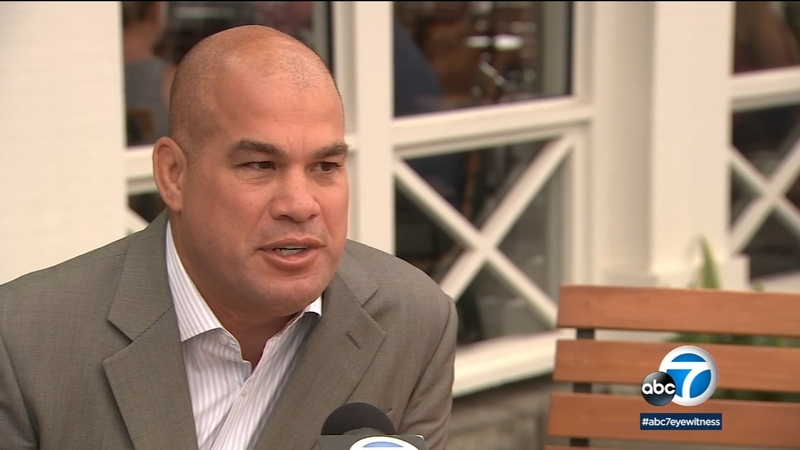 HUNTINGTON BEACH, Calif. (KABC) -- One of the biggest names in UFC history will soon appear on the ballot in Orange County.

"I'm not a politician at all. I'm an American that was born and raised here in Huntington Beach and I'm gonna fight for my community," Ortiz told ABC7. "This is my life. They've given so much to me in my career of mixed martial arts of 23 years. Now it's time to give back for them."

The 45-year-old thought about the decision back in June during the Black Lives Matter protests. He said he showed up not as a counter-protester, but to protect his city from anyone trying to burn it down.

Sandra Bookman has the details.

Much of his inspiration comes from President Donald Trump, who also made the move from celebrity to politician.

"I'll give a lot of credit to Donald Trump because he's not a politician. He's a businessman who had a business strategy to make America great," Ortiz said. "Will I run for president? I will not, nope. I think the Trump family has that handled 100%. You'll see the first woman president -- Ivanka Trump. Mark my words."

ABC7 reached out to the other 14 candidates for comment. Some were supportive of his decision to run.

"I went to Huntington Beach High School, the same as Tito Ortiz. I have been in the 4th of July parade for the past 32 years for HB. I have led the parade for the city and Tito has participated in the parade with me. I have the utmost respect for Tito running for political office," said Thomas LaParne.

"I think it is great that Tito has become civically engaged in our community. I understand the motivation to give back and protect our home for our future generations. That is what motivated me to run for City Council, so I completely understand why he would take on this challenge," said Gracey Van Der Mark.

Other candidates criticized his move.

"I honestly didn't know that Tito lived in town when he announced he was running. Serving as chair of the planning commission, he never showed up to speak about development and I've never seen him at Bolsa Chica helping to preserve and restore open space. The only time I've seen him in recent years is on TMZ or standing on the side of known hate groups 'protecting' HB from peaceful protests," said Dan Kalmick.

"While some are using their celebrity status and wild QAnon conspiracy theories to advance themselves politically and personally, I will continue my work in the community to feed the hungry, find housing for the displaced, and fight for environmental justice with the residents of southeast Huntington Beach and beyond," said Oscar D. Rodriguez

"Our culture has fallen in love with the idea of celebrity and our media has fueled the confusion of celebrity and leadership. In this election, voters have a choice and an opportunity to elevate rational, evidence-based, and compassionate voices into city leadership," said Natalie Moser.