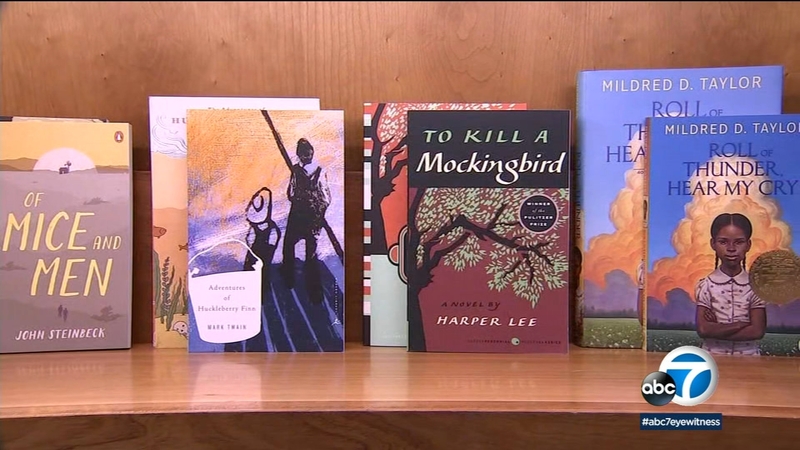 'To Kill A Mockingbird,' 4 other novels stir outcry in Burbank schools

BURBANK, Calif. (KABC) -- The iconic novel "To Kill A Mockingbird" is among five books on race that have been temporarily removed from the required reading list in the Burbank Unified School District after complaints from parents.

Among many issues, several of the books include the "N" word.

Carmenita Helligar raised a red flag when her daughter, the only Black student in her class, was confronted and berated by another student after studying one book.

"The boy said, 'I now know how to count you. And he started saying, 'One, 'N-word,' two 'N-word,' three 'N-word,' just to make her feel bad," said Helligar, who is a member of the Diversity, Equity and Inclusion committee.

The district says the five books are still available in schools, but they are not on the list of core books that all students must read.

Protests have been raised by the National Coalition Against Censorship, a freedom of speech organization called PEN America, and students themselves.

Sophomore and debate captain Sungjoo Yoon launched a petition to keep the books along with another student.

Superintendent Matt Hill must decide if the books should be returned to the required reading list or if they should be replaced by others that are more diverse.

"Do we have books that represent, not just white authors, or do we have people of color authors of multiple races and backgrounds? Do we have a diverse set of books that our students can access?," asks Hill.

Helligar brings her own history to the debate, recalling her great grandmother.

"Got to walk on her land, and her pointing out the places that her children were lynched," Helligar said.

She says that Burbank's reading list has kept the same books for 30 years and that an update is imperative.

"You don't get to be mediocre and pass that mediocracy over to students. You should be on what is going on right now, what is in current news, what should I be reading," Helligar added.

Yoon says that teachers have enough class time to teach new books in addition to what has been on the list.

He agrees that teachers need more training on how the "N" word is used in the classroom.

"Set more proper guidelines on how these should be taught rather than get rid of all the books," he added.

Superintendent Hills says the committee tasked to advise him could not come up with a consensus.