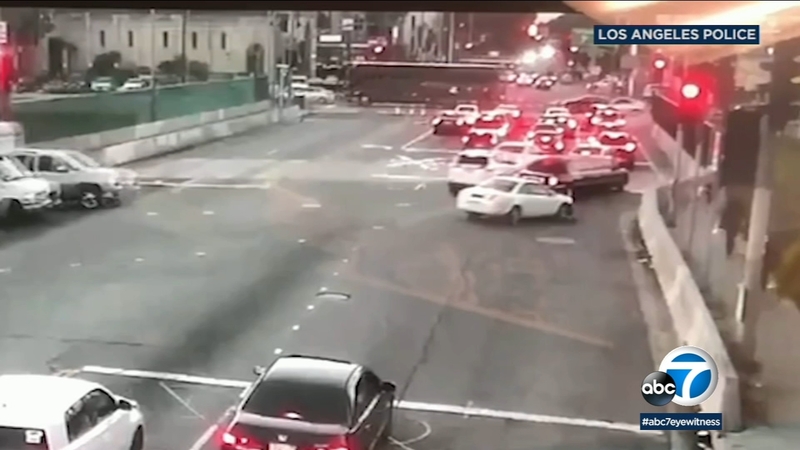 LOS ANGELES (KABC) -- Investigators are trying to figure out how a man got caught under a tour bus near the University of Southern California and was dragged several feet before his body dropped off.

A security camera captured a tour bus hurtling down Flower Street. A motorist behind would later describe a harrowing sight. A man was trapped under the back end of the bus. In vain, she tried to get the driver's attention.

About 1,000 feet later, a body of a 77-year-old pedestrian was seen on the street, but the bus driver moved on.

The bus is in an impound lot but does not show clear evidence of a criminal hit-and-run.

Detectives said the vehicle is so big - 45 feet - the driver may have been unaware he hit anything.

The charter bus is one of a fleet of five owned by Samho Tours out of Torrance. They travel to Vegas and as far as Mexico.

Investigators are conducting a forensic analysis of the bus and seeking more videos that might have recorded the incident around 5:30 p.m. Thursday at 23rd and Flower streets. Additional images may show whether the driver should have been more cautious.

Investigators have a potential theory: The pedestrian was possibly trying to make it to the platform of the Expo Blue Line, wasn't paying attention, walked into traffic and didn't see the bus coming.

It is also possible the bus driver wasn't paying attention.