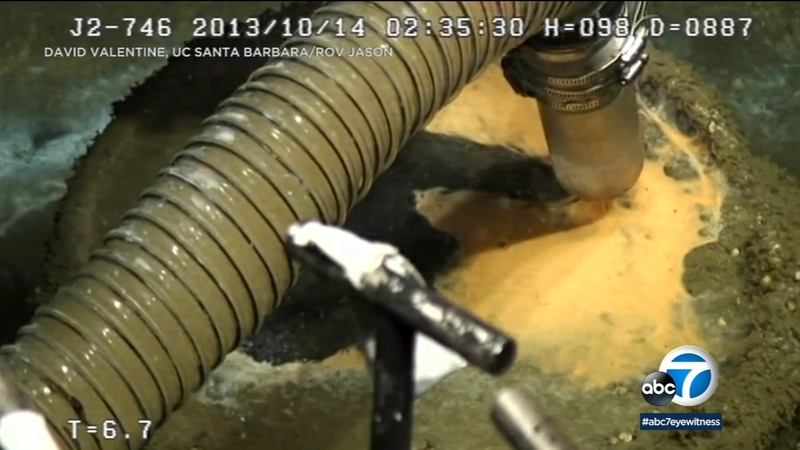 SANTA BARBARA, Calif. (KABC) -- Researchers are engaged in new efforts to map and quantify a massive toxic-waste dump that is polluting the ocean floor just off the Southern California coast.

Thousands of barrels of toxic industrial waste have been discovered, much of it containing high levels of DDT, the now-banned pesticide.

Researchers with the University of California Santa Barbara and the Scripps Institution of Oceanography have been studying the site for more than a decade.

Just last month they dispatched a new expedition aboard the research vessel Sally Ride, a ship owned by the U.S. Navy and operated since 2016 by the Scripps Institution.

The team spent two weeks surveying almost 50,000 acres of the ocean floor, the Los Angeles Times reported. They deployed high-tech robots that scientists compared to giant Roombas, although they focus on gathering information not vacuuming up the toxic material.

Researchers have been exploring this site and learning more about the extent of the pollution for at least a decade using underwater cameras and robotic vehicles. This latest expedition hopes to get a more detailed picture of the extent of the contamination - a precursor to trying to clean it up.

The Biden administration has expressed interest in taking action, according to Sen. Dianne Feinstein, D-Calif.

"I write regarding the issue of DDT contamination off the coast of California," Feinstein wrote. "I ask that you prioritize urgent and meaningful action to remediate this serious threat to human and environmental health."

A research report details how manufacturers of pesticides and other chemicals not only dumped the materials into the ocean, but were "sloppy" in the steps they took, meaning the material may be leaking from the containers.

The report names the Montrose Chemical Corp. describing it as the largest global supplier of DDT for decades.

Its Torrance plant produced more than 800,000 tons of the chemical from 1947 to 1982. While DDT was banned in the United States in 1972, the company continued to manufacture it in Southern California for export to other nations.

The report also notes that at one time dumping chemicals into the ocean was permitted by California and federal officials. The company is estimated to have dumped 2,000 to 3,000 barrels a month from 1947 to 1961 - or about 1 million gallons of waste per year.