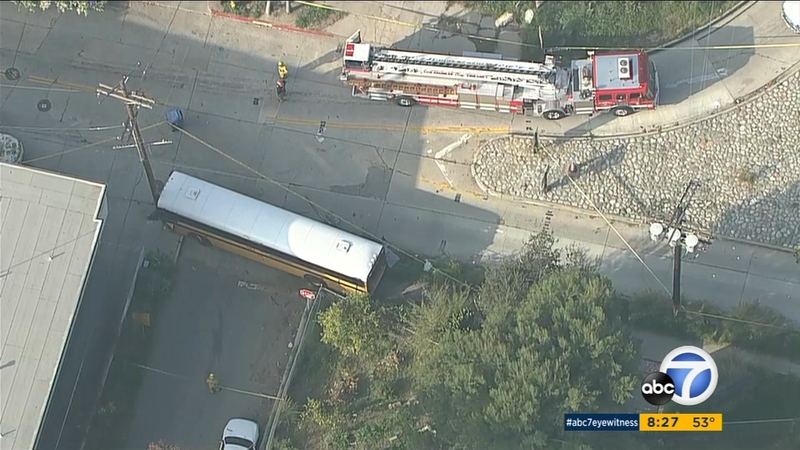 The collision was reported shortly before 7:30 a.m. in the 500 block of West Solano Avenue, toppling multiple electrical wires, the LAFD said in a statement. The bus was headed to a nearby middle school at the time of the incident.

"Everyone is out of the vehicle and clear of the hazard," the news release said.

At least nine children were assessed by firefighter-paramedics at the scene, and four girls were hospitalized in fair condition, according to officials. The girls were about 12 years old.

"According to the bus driver, it might be a mechanical failure on the brakes," a California Highway Patrol spokesperson said in response to questions about the possible cause of the crash. "Again, that's going to be part of the investigation."

The CHP spokesman noted that off-ramps from the northbound 110 Freeway near the scene "have really tight turns."

"So you need to slow down, as the speed limit is 55 miles an hour," he added.
Report a correction or typo
Related topics:
trafficelysian parklos angeleslos angeles county
Copyright © 2021 KABC-TV. All Rights Reserved.
More Videos
From CNN Newsource affiliates
TOP STORIES