Dodger Stadium may get aerial tram from Union Station 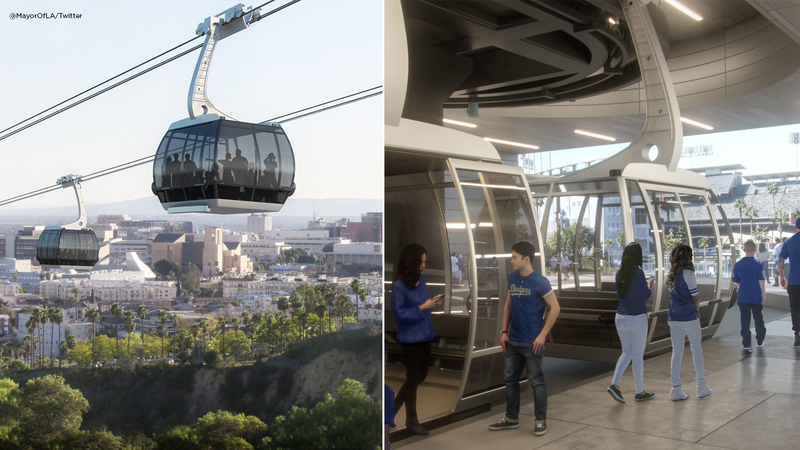 Dodger Stadium may get aerial tram from Union Station

ELYSIAN PARK, LOS ANGELES (KABC) -- Love the Dodgers but hate the traffic at Chavez Ravine? There could soon be a way around it by going over it, and it would take only five minutes.

A proposal is in the works to construct a gondola system from Union Station to Dodger Stadium - and the boys in blue have agreed to foot the bill for the project, 100 percent.

"Everybody's tried to solve the traffic problems of getting to Dodger Stadium for years and we think this is finally a way to do it," said project director Martha Welborne. "It's totally separated from traffic, you're flying above traffic and it will reduce congestion in the streets."

L.A. Mayor Eric Garcetti spoke about the plan Thursday morning at a Metro board meeting. The aerial transit system idea is a privately-funded proposal made to Metro's Office of Extraordinary Innovation, according to a press release from the mayor's office.

At the meeting, the mayor thanked the Dodgers for "stepping up and paying for this," saying the project has the potential to "revolutionize access to Dodger Stadium to the 3.7 million fans who visit Chavez Ravine each year."

"Although some of us would like to forget last year's World Series, I'm sure we all remember how much of a nightmare it was getting in and out...For our neighborhoods that have to suffer through exhaust and traffic, we hope that his can provide a solution," Garcetti said.

The mayor used MTA's Dodger Stadium Express as an example of a transit system that saw success, adding that the aerial transit system would have "high-capacity, quiet, zero-emission technology."
EMBED More News Videos

Love the Dodgers but hate the traffic at Chavez Ravine? There could soon be a way around it by going over it.

"We want to make it seamless with the Metro system and our TAP cards," the mayor said

Garcetti also said the 1.25-mile ride between Union Station and Dodger Stadium would take five minutes, every time. The tram will be able to transport more than 5,000 people per hour in each direction.

"So fans would literally rise up out of traffic for a journey. You can laugh at everybody in their cars underneath you and enjoy the skyline or the iconic L.A. sunset making your way to the game," he said, adding that the tram would be a great way to see the city for tourists and visitors even when games are not on.

The mayor said he foresees the aerial tram project opening for the 2022 baseball season. Metro would need to sign off on the project.

"It'd be more of a view, a spectacle kind of thing, going out there and experiencing the whole thing," Dodgers fan Jose De Los Santos said in an interview at Union Station, a pickup location for the Dodger Stadium Express bus. "I think it'd be fun for families and kids and all that stuff. So yeah, I'd definitely be open to that."
Report a correction or typo
Related topics:
trafficelysian parklos angeleslos angeles countybaseballsportslos angeles dodgers
Copyright © 2021 KABC-TV. All Rights Reserved.
More Videos
From CNN Newsource affiliates
TOP STORIES