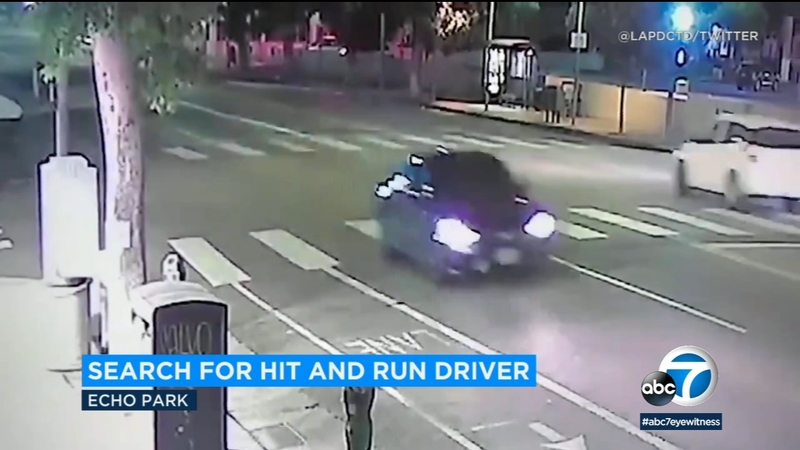 The collision was reported shortly before 5:30 a.m. at Sunset Boulevard and Douglas Street, a spokesperson for the Los Angeles Police Department said.

Police believe the victim, 60-year-old Jose Mario Vaquero, ran into traffic while trying to catch a bus on his way to work. He was pronounced dead at the scene.

The suspect's vehicle, described only as a dark colored Honda, was caught on surveillance video moments before the deadly collision. Part of the car's front bumper was left behind at the scene.

"You probably just panicked, freaked out, but I'll hear you out," LAPD Detective Moses Castillo said. "We expect for this Honda to have some severe front-end damage, maybe under the carriage of the vehicle. And it also has dark, tinted windows."

The victim's family was distraught as they visited the scene of the accident.

"Beg to the person to (come) to the police. I know accidents happen, but please (come) forward," said America Martinez, the victim's ex-wife.

Vaquero's family says he was a good worker who is survived by his three children.

"We was divorced for 19 years, and even like that, we have a good relationship, always communicating," Martinez said.

Investigators say there have been 20,000 hit-and-run accidents each year since 2016.

People in the neighborhood were shocked to hear of the hit-and-run incident.

"It's terrible, you know. It's gut-wrenching. And to know that it could be your neighbor leaving you there on the street," one resident said.
Report a correction or typo
Related topics:
trafficecho parklos angeleslos angeles countyhit and run
Copyright © 2021 KABC-TV. All Rights Reserved.
More Videos
From CNN Newsource affiliates
TOP STORIES