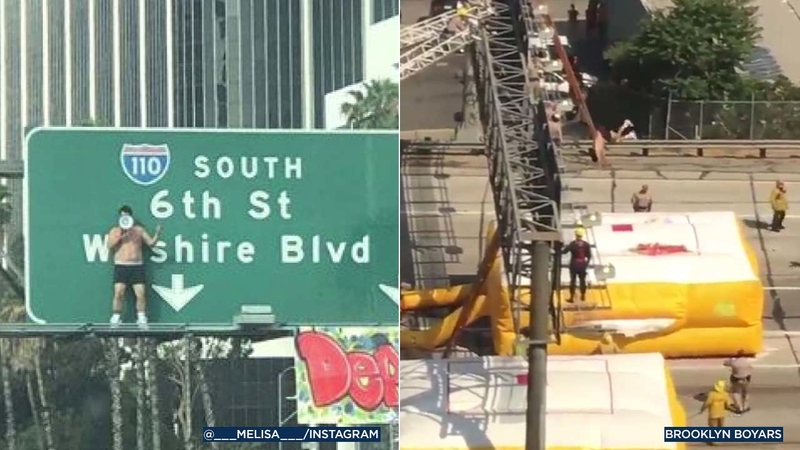 The man scaled the sign near the Beaudry Avenue exit around 8 a.m. He hung protest posters off the ledge of the freeway sign.

California Highway Patrol officers said they were not sure what the man was protesting, if anything. One sign read, "Fight pollution, not each other," and another read, "Give a hoot, don't pollute."

The southbound 110 Freeway lanes were closed as police officers and firefighters responded to the scene. Traffic was backed up for miles.

Firefighters placed inflatable cushions underneath the man and extended ladders to him. Emergency personnel also went up to the freeway sign and tried to talk to the man to convince him to come down.

The traffic snarl spread onto connecting freeways and surface streets, and workers in nearby buildings stopped to watch the events unfold. Cars passing on the other side of the freeway at times honked at the man and one even shouted to police: "Shoot him!"

At around 10 a.m., he eventually came down - doing a back flip onto the yellow inflatable air cushions deployed by authorities across freeway lanes.

He appeared unhurt as authorities quickly placed him in handcuffs. He was seen being placed into an ambulance.

California Highway Patrol officials tweeted at about 10:30 a.m. all lanes are back open.

Currently on the 110 south. @ABC7 pic.twitter.com/lQ9FFyrp2C