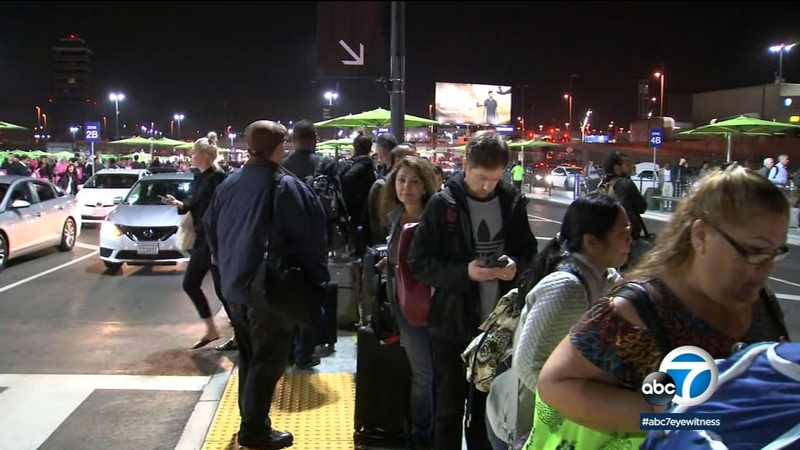 LAX ride-share ban: Travelers livid after getting stuck in shuttle

LAX travelers were livid after getting stuck in a shuttle for nearly an hour on day one of the airport's ride-share ban.

Under the new procedures, people hoping to grab a taxi or get picked up by Uber or Lyft can only do that in a new location called "LAX-it," which is an empty lot east of terminal 1.

The airport has a fleet of shuttle buses to carry passengers from the terminals to the LAX-it lot. The airport says shuttles are scheduled to arrive every 3-5 minutes during peak hours.

Passengers said the shuttles did come in a timely manner, but once they boarded the shuttles, it was a different story. Some said they were stuck in the shuttle for up to 40 minutes.

"Everybody was angry...waiting for super long time, and everybody was screaming on the bus. They wanted to get off," said one passenger.

And once they arrived at the LAX-it lot, things were still chaotic.

"Once you get to the lot, there's no direction really. There's a line to get an Uber," said one passenger. "What sense does that make?"

Ride-share drivers also expressed frustration. One Lyft driver said it took him 30 minutes just to get into the lot and then his app stopped working.

"I tapped that I arrived and now it's not working they had me close out all my other apps and it's still not working," said one rideshare driver.

After numerous complaints from passengers, LAX released this statement:

"At one point this morning it was 80% faster to drive the loop on the upper level than it was at the same time last week. This is day one. We know there are some kinks...we're going to keep working them out."

Airport also took to Twitter to apologize to frustrated travelers.