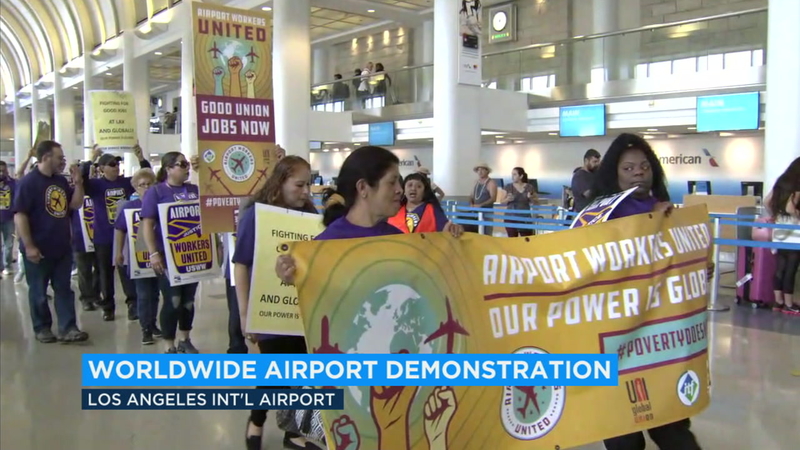 Workers protested for better air wages and union rights. The demonstration happened at 11:30 a.m. inside and outside the Terminal 4 departure level.

LAX workers ranging from baggage handlers to janitorial and security staff joined employees from 40 airports in 13 countries for the worldwide demonstration.

According to the SEIU, the International Transport Workers' Federation and the UNI Global Union, the demonstrations took place at airports that impact 36 percent of the world's daily travel, which serves about 4 million passengers every day.

Protests were also held at airports in Boston, Seattle and Baltimore and overseas in Paris, Amsterdam and Frankfurt.

The union said it's inspired by the recent raises at John F. Kennedy International, LaGuardia and Newark Liberty International airports to $19 an hour.

The union hinted that Tuesday might not be the only airport disruption it has planned.

In a statement, American Airlines said that though they do not anticipate any impact on its operations, it advises passengers to arrive early for their flights due to potential traffic congestion from the protest.

The statement read, in part: "American Airlines respects the right of employees and workers to organize. In fact, many of our direct employees are union represented with the company's full support. The planned demonstration by the SEIU is related to employees of companies we do business with. We do not get involved in union representation discussions between other companies and their employees."

United Airlines also released a statement, saying it provides its employees with "competitive compensation and industry-leading benefits and privileges" whether or not they are part of a union.