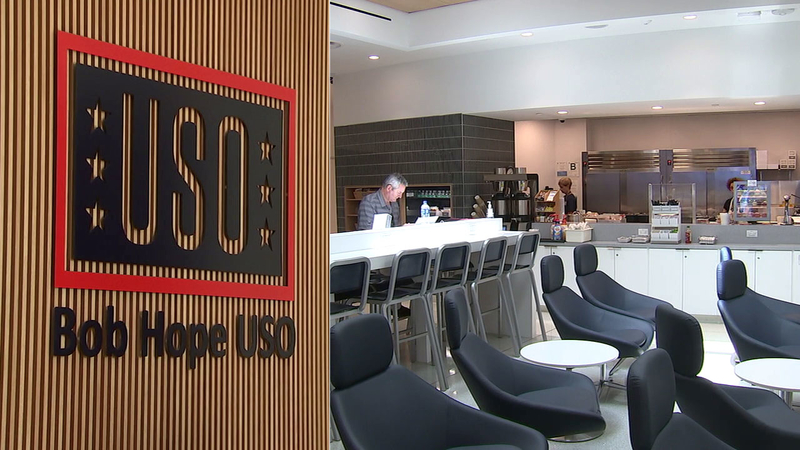 LOS ANGELES (KABC) -- Military troops and their families have a new place to unwind when traveling through one of the busiest airports in the world, LAX.

The Bob Hope USO is now located inside the iconic "Theme Building", better known as that space ship-looking structure in the center of the airport.

"We're about twice as big here and have just a state-of-the-art facility that's able to serve our troops as they come through this busy airport 24/7" said Charissa Gonzales, vice president of development and communications for the USO.

Some people may be confused and think the Bob Hope USO is part of a government agency, but that's not the case. They rely entirely on contributions from individuals and philanthropic corporations and organizations.

Gonzales said, "Since 1941 the USO's mission has been to serve current members of the military and their families so anyone that is deployed and on active status including reserves and National Guard, we're here to serve them and make their lives just a little bit easier as they're serving our country."

The Bob Hope USO is a place for service members to relax while traveling. They've got free snacks and beverages, a theater where they play classic movies, a lending library of books and movies and even a family room where kids can play games. Plus an outdoor area where service members can just hang out and relax.

The Marines we spoke with were pretty impressed with the new facility.

"I think it's really fancy," said Jedidias Tolbert. "So, it's pretty cool. I already got lost a few times!"

Fellow Marine Joshua Martine was pleased with the brand new facility, as well.

"It was new and different. I was really surprised. It was a good surprise. It's a lot bigger. It's nice," Martinez said.

"With these new amenities and much larger facility we want them to have an enhanced guest experience and know that we value them at LAX," said Jocelyn Steele, a public information officer for the airport.

"Well, I can definitely say this new facility has a lot more room," Kaylee Taylor said. "The last one was pretty crammed at times. I mean I had a cool outside area but this one's better. A lot more modern!"

While working at LAX, Kasey Brann signed up to volunteer for an event the USO was doing on Thanksgiving.

Charissa Gonzales says she's happy the new Bob Hope USO at LAX is up and running.