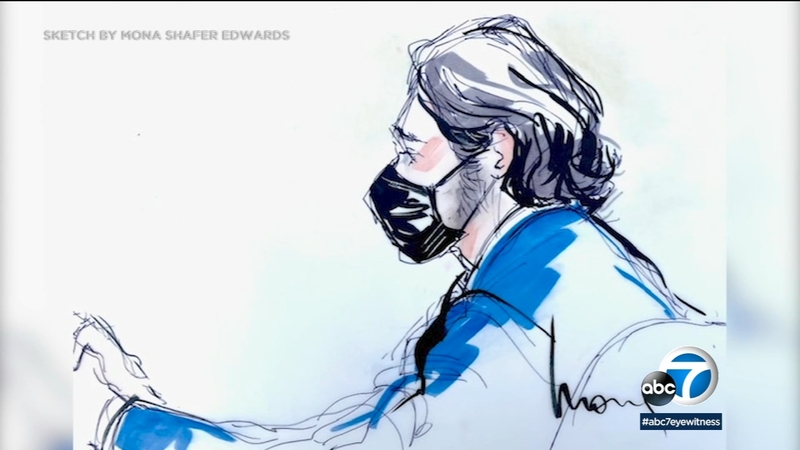 DOWNTOWN LOS ANGELES (KABC) -- The 27-year-old San Diego woman who says Trevor Bauer violently attacked her during two sexual encounters earlier this year is seeking a five-year restraining order against the Los Angeles Dodgers pitcher. Both she and Bauer were in court in downtown L.A. Monday.

Bauer's accuser took the stand in a hearing to extend the temporary restraining order she filed against him.

Eyewitness News is not using her name because she is the alleged victim of sexual assault.

On Monday, Bauer and his accuser did not make eye contact. Bauer looked forward as his accuser was asked how the two met.

She said she first became interested in Bauer when she saw him pitching during a spring training game in February.

In April, she tagged him on Instagram. She says she was not expecting any response, although he did respond.

An Ohio woman sought a protective order against Dodgers pitcher Trevor Bauer last year after accusing him of punching and choking her without consent.

She says flirty direct messages were exchanged and they agreed she'd drive up to his Pasadena home to meet in April.

She was asked if she was expecting to have sex with Bauer. She said no. She expected to "crash on his couch."

Bauer is accused of having rough sex on two occasions with his accuser. Each time, she says, he used her hair to "choke her out." She says he also punched her face and other areas of her body that left her bruised.

Both sides agree the sex was consensual, but the victim alleges she didn't consent to the choking and punching.

In her opening statement, Bauer's attorney Shawn Holley said her client had every reason to believe the San Diego woman wanted the choking and other rough treatment in two sexual encounters with Bauer.

Holley pointed to Instagram direct messages the woman sent Bauer in which she said she had "never been more turned on in my life" than when Bauer choked her to unconsciousness during their first encounter in April and wanted more of the same when they got together again in May.

The alleged victim's attorney told the judge they're seeking a five-year restraining order against Bauer.

The hearing is expected to last at least three to four days.

If Bauer takes the stand, his attorney says he'll invoke his Fifth Amendment right not to incriminate himself.

Once Pasadena police completes its investigation, the department will turn over the case to the L.A. County District Attorney's Office for review.

Bauer was placed on paid administrative leave on July 2 by Major League Baseball. That leave has been extended through Friday.

Bauer was the subject of another protective order sought by an Ohio woman last year who claimed he punched and choked her without consent while they were having sex, The Washington Post reported on Saturday. Bauer tweeted a statement calling the report "false" and "baseless."

Bauer agreed to a $102 million, three-year contract to join his hometown Dodgers earlier this year after winning his first Cy Young with the Cincinnati Reds last season. Bauer is 8-5 with a 2.59 ERA in 17 starts this season.