Town of Trona, hit by huge earthquakes 2 years ago, struggling to recover 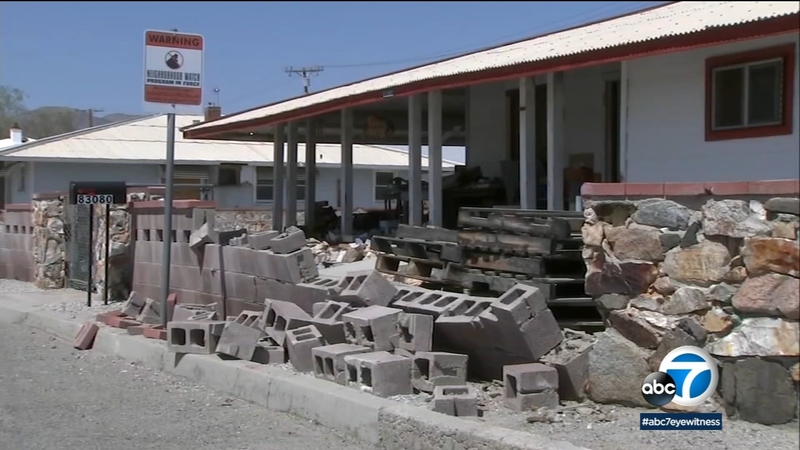 Trona, hit by huge quakes 2 years ago, struggles to recover

The town was already experiencing a declining population before the quakes, roughly 1,500 residents, and now it's even less.

"We just want to survive. We want to get back to the way it was before the earthquake," said Priscilla Benadom, a lifelong resident of Trona.

Instead of rebuilding, businesses have packed up like the Family Dollar Store, the only market in town which only had limited offerings.

"They were red tagged after the earthquake and they pulled up stakes and left. Nobody has been able to lease that building since," said Benadom.

"Everything was just in shambles. Around here, you see homes that are getting ready to fall after the earthquake, then you come back out and the building has fallen. We still need a lot of help here," said Linda Medina, who also lived in Trona most of her life.

Most of the high school was red tagged forcing students to attend classes at the elementary school. Some say it would cost more to fix the school than to knock it down and build a new one.

"Repairing that damage is going to take about $55 million and the Trona Unified School District unfortunately just doesn't have the money to do that," said Congressman Jay Obernolte, who represents Trona in the U.S. House of Representatives.

Obernolte says he's still fighting to get Trona the support and funding it needs to recover from the earthquakes, but blames FEMA's outdated formula for disaster declarations as a reason why the community hasn't gotten big money from the federal government.

With so many homes red tagged, it's been hard for Linda Medina to find a new place after hers was deemed unsafe. Medina has been living with her mother and tells eyewitness the entire community is still on edge.

"We hear an aftershock or the train that's right here, people go oh it's an earthquake. A lot of people didn't put their stuff back on the walls. They kept in boxes waiting for the big one. they're still like that now," said Medina.

Another thing that's hurt Trona was the pandemic, which has made it difficult to fundraise. As the population shrinks, the town's future is uncertain.

MORE | Are you prepared for a major earthquake?
EMBED More News Videos

Gathering the proper supplies to have on hand in the event of an earthquake can feel overwhelming, but you might have more on hand than you think.