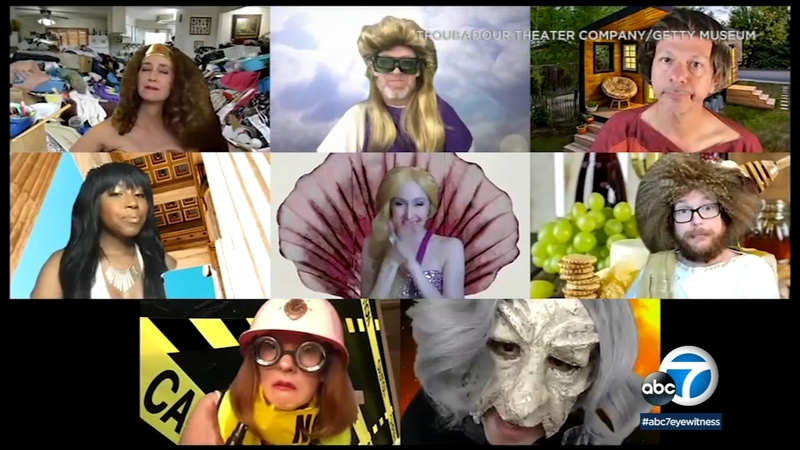 Homer meets the Troubies with 'The ODDyssey'

LOS ANGELES (KABC) -- The famed Troubadour Theater Company is "Zooming" its way into a new adventure. "The ODDyssey" takes Homer's epic poem from Ancient Greece and re-imagines it into five webisodes for The Getty YouTube Channel. The "Troubies" says its version of "The ODDyssey" is like The Rosetta Stone of epic poems. It tells the story of a Greek hero's long journey home after the fall of Troy.

"It's a fun way for families to get together and watch a version of 'The Odyssey' and still not know what it's about," said Troubadour Matt Walker.

They readily admit to focusing on the "odd" of "The ODDyssey."

"That first syllable is our focus and it has been an odyssey making it!" said Troubadour Beth Kennedy.

Everyone involved with the Troubadour project worked from their home studios, including real-life husband and wife, Michael Faulkner and Amanda Pajer, who play Odysseus and his wife, Penelope.

The Troubies have worked with The Getty for more than a decade now. But this marks The Getty's first virtual theatre presentation.

"Kudos to The Getty for thinking outside the box and, you know, for The Troubies to kind of weather this storm and move forward to learn new skills and try to bring our brand of comedy to their audience," said Walker.

"We can reach more people this way and hopefully expand our Troubies awesome fan base," said Kennedy.