Migrant caravan headed to US grows to 7,200: UN official 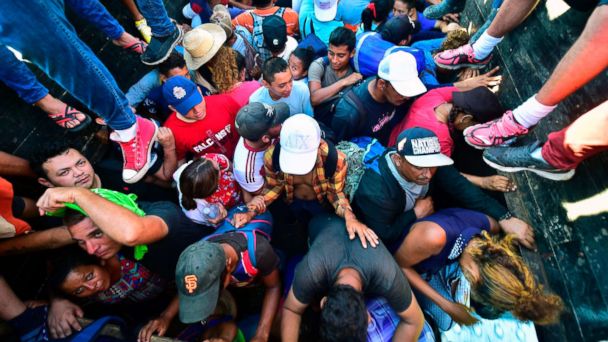 As thousands of Central American children, parents, elderly and other adults intent on migrating to the United States awoke from a night sleeping on concrete in far-southern Mexico, President Donald Trump resumed tweeting about the migrant caravan as the fault of Democrats and a danger to the U.S.

The caravan of migrants, mostly from Guatemala and Honduras, bedded down Sunday night on the concrete of a town square in Tapachula, Mexico, but awoke Monday determined to resume their arduous journey to the U.S. border still some 1,700 miles away.

Overnight the group was joined by about 1,500 additional migrants who followed them up from Guatemala, organizers told ABC News. The total number of migrants now headed to the U.S. border is estimated to be about 7,200, United Nations Deputy spokesman Farhan Haq told reporters in New York on Monday.

Haq said that the International Organization for Migration reported that migrants continue to stream into Mexico from Guatemala and "are likely to remain in the country for an extended period."

Trump, meanwhile, in a series of tweets asserted that "criminals and unknown Middle Easterners" are amid the crowd, for which he offered no evidence. He also again said Democrats are to blame for not working with his administration on immigration reform.

"Every time you see a Caravan, or people illegally coming, or attempting to come, into our Country illegally, think of and blame the Democrats for not giving us the votes to change our pathetic Immigration Laws! Remember the Midterms! So unfair to those who come in legally," Trump tweeted Monday morning.

The Senate Democratic leader, Chuck Schumer of New York, dismissed Trump's claim as a diversion from other issues, particularly health care, ahead of the midterm elections.

Efforts to reach a compromise in Congress on immigration reform stalled after Trump refused to back a bill that didn't include radical reductions to the current legal immigration system.

The president went on to tweet that the Mexican federal police have been unable to stop the sea of humanity. The Mexican officers have been monitoring the caravan since the crowds breached a fence Friday at the Mexico-Guatemalan border and pushed past border patrol agents.

"Sadly, it looks like Mexico's Police and Military are unable to stop the Caravan heading to the Southern Border of the United States," Trump tweeted Monday. "Criminals and unknown Middle Easterners are mixed in. I have alerted Border Patrol and Military that this is a National Emergy. Must change laws!"

Trump offered no evidence that anyone from the Middle East is with the Central American migrants. An ABC News crew traveling with the group has also seen no evidence to support the president's claim.

The president also blasted the governments of Guatemala, Honduras and El Salvador -- the countries that make up the so-called "Northern Triangle" of Central America -- for failing to prevent the exodus of people from their countries. He threatened to cut off aid.

"Guatemala, Honduras and El Salvador were not able to do the job of stopping people from leaving their country and coming illegally to the U.S. We will now begin cutting off, or substantially reducing, the massive foreign aid routinely given to them," Trump tweeted Monday.

As he left the White House Monday afternoon for a campaign rally in Houston for Sen. Ted Cruz, R-Texas, Trump slammed the Central American countries during a gaggle with reporters on the South Lawn of the White House.

"We give them tremendous amounts of money ... Hundreds of millions of dollars," said Trump, adding that in return they give "nothing to us."

He also criticized the Mexican government's handling of the caravan.

"I guess it looks like the people are walking right through the middle of Mexico. So I'm not exactly thrilled there either," Trump said.

White House press secretary Sarah Sanders said "absolutely" there is credible evidence of Middle Easterners in the caravan of migrants.

"Absolutely," Sanders said when asked about any evidence of Middle Easterners in the caravan. "And we know this is a continuing problem and it's not just in this, we have 10 individuals suspected or known terrorists that try to enter our country illegally every day. This is a problem the president's been talking about for a long time and certainly one we'd like to see addressed," Sanders said.

ABC has asked the White House for more details about that evidence Sanders referenced.

Despite the president saying he's looking at cutting aid or calling for a state of emergency at the border, Sanders could not say what specific steps the administration is planning in reaction to the migrant caravan other than saying "all options are on the table."

Rep. Eliot Engle of New York, the ranking Democrat on the House Foreign Affairs Committee, said it would be illegal for the president to withhold foreign aid to Central American countries appropriated by Congress.

"Fortunately, Congress -- not the president -- had the power of the purse, and my colleagues and I will not stand idly by as this administration ignores congressional intent," Engle said in a statement Monday.

Mexican President Enrique Pena Nieto suggested that getting into the U.S. or staying in Mexico will be difficult after the migrants failed to follow the appropriate legal process.

"For those who have opted to maintain this illegal caravan, I respectfully call on you to keep in mind that by maintaining this position, it will be very difficult to reach your objective whether it be to enter the United States or to stay in Mexico. Because only with migration protections and a legal process can you enter our country and be able to eventually have access to this right," Nieto said.

The rickshaw driver told ABC News on Monday that the girl was treated and was doing better.

Many of the migrants said they are fleeing violence and murderous gangs in their homelands.

"My family is suffering right now, but what's happening in Honduras is worse," one migrant, Blanca, who is traveling with her two young sons and teenage daughter, told ABC News.

Blanca said she fled her Honduras home with her children after her husband was killed by gangs. She said her goal is to reach the United States.

The migrants have been warned by Mexican federal officials that they entered that country illegally and have been advised to go to shelters and apply for asylum to legally remain in the country, at least temporarily.

But many of the those in the caravan told ABC News that they believe the offer of asylum is a ruse to round them up for deportation.

Thousands of migrants walked about 25 miles on Sunday from near the Guatemala border to Tapachula, Mexico, where they spent the night in the town square.

Unlike in previous days, the presence of Mexican federal police and military Blackhawk helicopters were not in sight as the migrants walked north, many holding hands and chanting, "United people will never be defeated!"
Report a correction or typo
Related topics:
abc newsnational
Copyright © 2020 ABC News Internet Ventures.
More Videos
From CNN Newsource affiliates
TOP STORIES