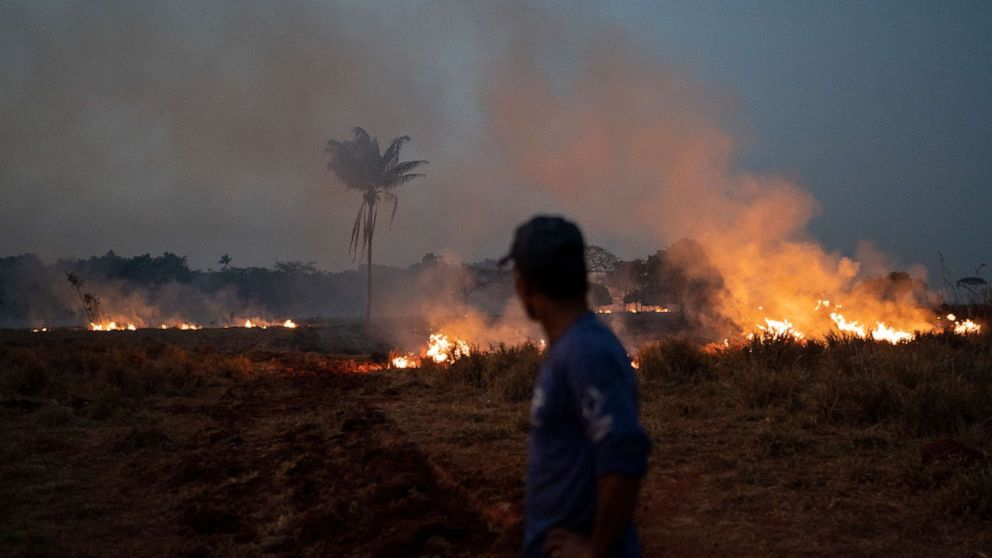 Trump says he spoke with Bolsonaro and offered U.S. assistance in fighting the Amazon fires. Scientists say the number of fires are up 84% in 2019 versus a year ago.

"Just spoke with President @JairBolsonaro of Brazil," Trump tweeted. "Our future Trade prospects are very exciting and our relationship is strong, perhaps stronger than ever before. I told him if the United States can help with the Amazon Rainforest fires, we stand ready to assist!"

A U.S. official said there has been no formal request from Bolsonaro's government, but there have been conversations between them and the U.S. about assistance fighting the fires.

A State Department spokesperson said Brazil "has not yet requested assistance. ... We stand ready to consider any such request."

"We share the Brazilian government's concerns about the Amazon forest fires and their impact on the region's communities and natural resources," the spokesperson added.

While Sen. Brian Schatz, D-Hawaii, threatened Thursday to withhold foreign assistance to Brazil over Bolsonaro's handling of the fires, the spokesperson said the State Department "continues to work with Brazil on increasing investment in healthy forests, creating incentives to protect these critical natural resources."

Bolsanaro, an outspoken conservative who has been likened to Trump, confirmed Friday evening he had a conversation with the U.S. president.

"I had an excellent conversation today with the President @realDonaldTrump. Relations between Brazil and the U.S. are better than ever," he tweeted in Portuguese. "We have a mutual desire to launch a major trade negotiation soon to promote the prosperity of our peoples.

"President Trump has also been available to assist us in protecting the Amazon and fighting fires if we wish, as well as working together for an environmental policy that respects the sovereignty of countries."

Bolsanaro's government has come under criticism for its role in the exploding rate of wildfires in the critical natural environment. There have been over 9,500 fires just since last Thursday, NatGeo explorer and conservationist Andres Ruzo told ABC News this week.

While it's unclear if the fires were natural or deliberately set, Bolsonaro's government has called for a double-digit increase in deforestation, according to The Associated Press. He went on the offensive and blamed nongovernmental organizations for intentionally setting the fires to make him look bad -- a claim for which he offered no evidence.

National and international critics have blasted Bolsonaro for increasing logging and mining activities in the jungles. Brazil's beef industry, the largest in the world, has also contributed to deforestation.

"The Amazon is literally on fire," Schatz said in a statement Thursday. "And instead of confronting this crisis, Brazilian President Jair Bolsonaro has pointed the finger at nongovernmental organizations charged with protecting the rain forest and called his own government's reports on deforestation fake. The United States cannot treat this as business as usual."

The Amazonian rainforests are critical not just to South America, but to all of Earth as the producer of 20% of the oxygen for the entire world.