Trump's pick for Russia envoy distances himself from Ukraine controversy 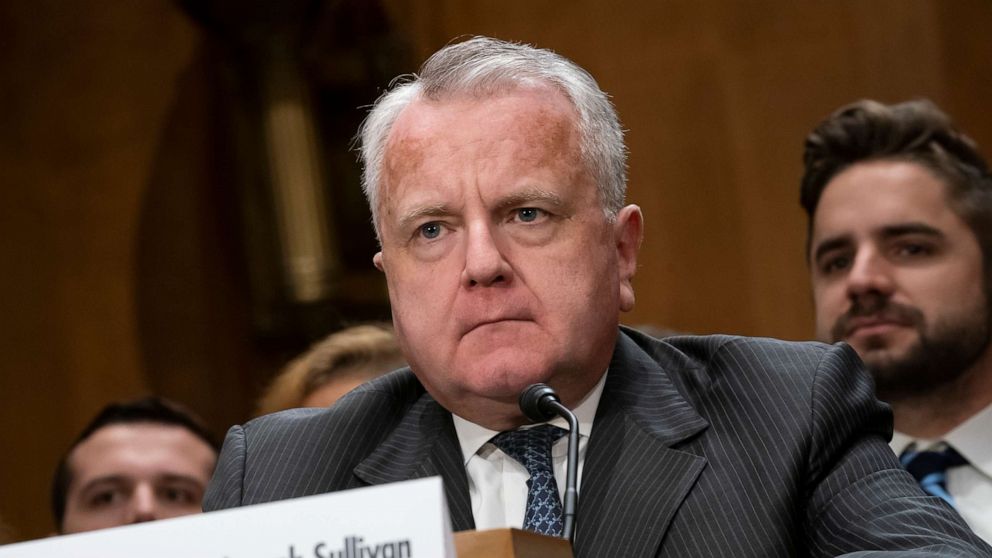 President Donald Trump's nominee to be the U.S. ambassador to Russia was grilled by senators Wednesday about the president and his personal lawyer Rudy Giuliani's push for Ukraine to launch investigations favorable to Trump politically -- the first official to face public questioning about those efforts that are at the center of the House's impeachment inquiry.

John Sullivan, who serves as the deputy secretary of state, testified that it would not be appropriate for the president to solicit investigations into a domestic political opponent, but he said he was "not aware" of an effort to do so by Trump or anyone on his behalf.

But Sullivan at times contradicted himself as he sought to defend the Trump administration's Ukraine policy while also downplaying his role in it.

He confirmed that he informed former U.S. ambassador to Ukraine Marie Yovanovitch that she was being removed despite doing "nothing wrong," and although, as the department's second in command, he helped oversee the personnel involved in Ukraine policy, both officially and as part of Giuliani's effort, he said he was unaware of that effort -- prompting skepticism from some senators.

"If people [were] operating outside of your specific instructions, I think it's curious that you would not try to find out," said Sen. Chris Murphy, D-Conn.

Trump and Giuliani, with the help of U.S. ambassador to the European Union Gordon Sondland and former special envoy for Ukraine Kurt Volker, are alleged to have pushed Ukraine's new president Volodymyr Zelenskiy to launch investigations in exchange for a White House meeting and later for $391 million of U.S. military assistance. In particular, Trump sought investigations into Ukrainian energy company Burisma and former Vice President Joe Biden's son Hunter, who sat on its board, as well as an unfounded conspiracy theory that it was Ukraine that interfered in the 2016 election, not Russia.

The White House has denied such a "quid pro quo," despite Trump raising both topics on a July 25 call with Zelenskiy and even after acting chief of staff Mick Mulvaney said so.

Sullivan reiterated those denials, adding that it is not the Trump administration's policy that Ukraine investigate either subject: "Our policy has been to encourage anti-corruption reform generally in Ukraine -- it's something that I've worked on for over two years -- but never with respect to a particular investigation, or company, or individual."

But later, he said, "Looking at, as the chairman mentioned, that gas company and board member and U.S. person involvement was certainly mentioned by the president and therefore part of U.S. policy."

"What the president has denied is a quid pro quo," he added.

Sullivan said he was aware in July that Ukraine security assistance was held up, but he did not know the reason why. He thought it was part of a larger hold on foreign aid by the White House's Office of Management and Budget, he said, but he was more concerned about the portion withheld for the Northern Triangle countries of Honduras, Guatemala, and El Salvador because that was his purview.

He also denied any knowledge of Giuliani's efforts, along with Sondland and Volker, to pressure Zelenskiy's government, saying he only knew of Giuliani's "connection to a campaign against our ambassador to Ukraine." That disinformation campaign to discredit Yovanovitch reached the president, who told Zelenskiy she was "bad news," according to the rough transcript of their conversation released by the White House.

That loss of confidence may have stemmed from a packet put together, at least in part, by Giuliani. Earlier this year, it was transmitted to the State Department by "someone in the White House," Sullivan said, after Pompeo and others had been pushing back for months on Yovanovitch being fired and asking what she had done wrong. Sullivan said that he forwarded the packet to the department's inspector general and the Department of Justice to assess its accuracy, its origins, and "who was giving it to us to influence us."

But while Sullivan portrayed Pompeo and he as pushing back on the smearing and firing of Yovanovitch, he also said he did little to ask questions behind some of these other decisions, like why the military aid was held up and what he could possibly do to help free it. Beyond Giuliani's attacks on Yovanovitch, Sullivan said he wasn't "sure exactly what he was up to," declining to comment on its appropriateness. He never sought to find out who was instructing Volker and Sondland to act in concert with Giuliani -- who he said did not and does not work for the department and isn't paid by it -- and declined to comment on the appropriateness of their actions.

"I'd have to think about it," he said, adding, "The concept of investigating a political rival, as opposed to encouraging anti-corruption reform... that would be inconsistent with our values."

Sullivan would replace Jon Huntsman, the former Utah governor and Republican presidential candidate, who served in Moscow for two years and departed in October.

The post is a critical one at a critical time -- with senators also pressing him on nuclear arms control, Russian election interference, the treatment of U.S. diplomats, Russia's role in Syria, and the extensive sanctions regime against Moscow.

Because of that, it seems likely that Sullivan will be confirmed by the Senate.
Report a correction or typo
Related topics:
abc newsnational
Copyright © 2020 ABC News Internet Ventures.
More Videos
From CNN Newsource affiliates
TOP STORIES