Man shot and killed during a fight with Tulare police identified 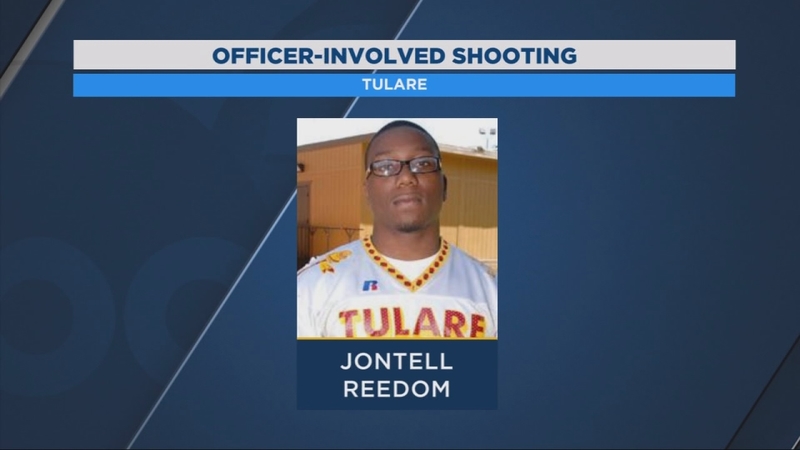 Man shot and killed during a fight with Tulare Police identified

TULARE, Calif. -- A video taken by a passerby shows a man, identified as Jontell Reedom, being pursued by a Tulare police officer and fighting with him.

The officer and his partner used a baton, Taser and pepper spray during the scuffle, but when Reedom took the baton away from one officer that's when shots were fired.

"It was a horrible thing to watch. He didn't deserve to die like that. I think there were other things that could have been done to de-escalate the situation," said Amber Wilson, a friend of the shooting victim.

Wilson and others, who came to leave items at a memorial on the sidewalk where Reedom was killed, saw the video and felt police went too far.

"I think they could have done it a better way than to take a life," Rick Berry said.

Tulare Police note Reedom was a suspect in a physical assault on a bus driver and resisted arrest.

"During this altercation, the subject grabbed the officer's baton and that's when shots were fired," interim Chief Barry Jones said.

The two police officers involved were injured, and one has a broken nose. Both have been placed on administrative leave while the Tulare County Sheriff's Department conducts an investigation into the shooting.

Friend Gabe Adulvar said Reedom had mental health problems in recent years and often wandered the streets but was known to police.

"I know they ran into him a lot because people would call because he was walking around a lot. But I don't want people to remember him like that. I want them to remember him like he was in high school. He was top notch, he was being recruited to Texas and USC," Alduvar said.
Report a correction or typo
Related topics:
central californiapolice shootingtulareofficer involved shootingman killedman shot
Copyright © 2022 KFSN-TV. All Rights Reserved.
TOP STORIES
Meat Loaf, 'Bat Out of Hell' rock superstar, dies at 74
Motorcycle rider killed in violent high-speed crash in West Hills
102 COVID deaths reported in LA County, highest since March 2021
CA proposal would let older kids get vaccines without parents' consent
UCLA grad student Brianna Kupfer remembered at Hancock Park vigil
Sheriff Villanueva to tackle homelessness in Hollywood
Gov. Gavin Newsom in LA after 'porch pirates' target cargo trains
Show More
Family of man shot and killed in East LA by CHP officers seeks justice
New Year's resolutions key to health during omicron surge, doctor says
McConnell: Black people vote at similar rates to 'Americans'
LA, Ventura counties' COVID gun store shutdowns ruled illegal
Heartworm disease-carrying mosquitoes threatening pets in OC
More TOP STORIES News