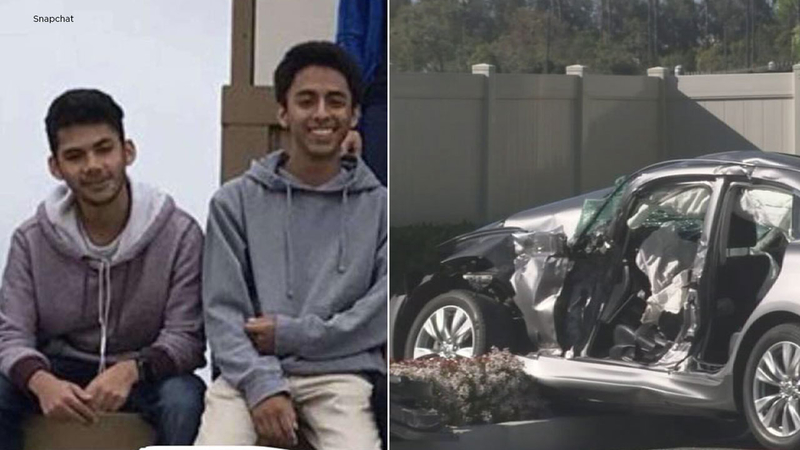 SANTA ANA, Calif. (KABC) -- A second teenager has died following a crash in Tustin on Friday that killed another teen and injured five other people.

Anguiano was a passenger in an Infiniti M37 sedan that crashed in the 16000 block of Legacy Road.

Passenger Pedro Fuentes, also 17 years old, died at the scene. Four other teens and a 20-year-old woman were also injured.

Family and authorities say the victim is Santa Ana resident Pedro Fuentes, who also goes by the name Peter.

Police said the Infiniti was speeding when the driver lost control. The car flipped on its side before crashing into a box truck.

Authorities believe at least two people did not have seat belts.

Jonathan Swanson, the principal at Century High School in Santa Ana, confirmed that both Anguiano and Fuentes were students at the campus, as well as some of the other victims.

He said the loss hit the community hard.

"I don't know that there's any one thing you can tell students to help cope with this tragedy. We will have a full team of crisis response counselors here. The district has been great in supporting that," he said.

Holding flowers and wearing white, scores of somber students gathered at the campus on Monday for the first time since the two fellow classmates were killed.

One student who was friends with Anguiano and Fuentes said they were both happy, friendly and well-liked.

Friends and classmates observed a moment of silence in the victims' memory at the start of school. They plan to decorate their desks and favorite meeting spots.

"We have lunch table where they used to sit, and we're going to place some flowers and teddy bears on their table so they can know that we're here for them no matter what happens," said student Angel Alcala.