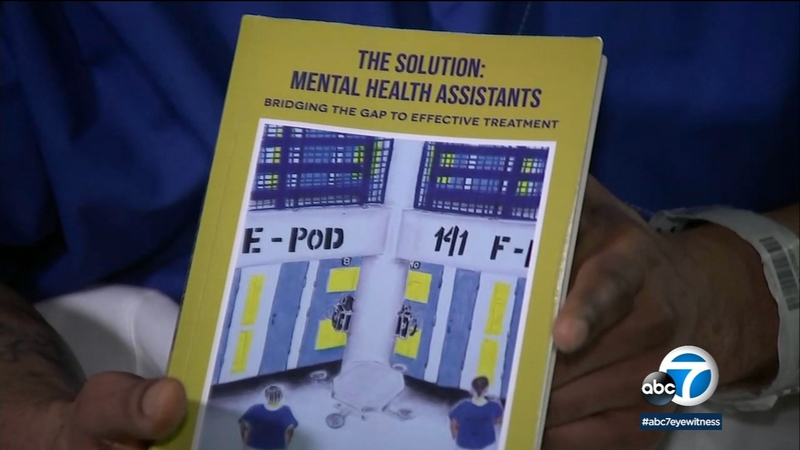 Inmates helping others struggling with mental illness at DTLA jail

DOWNTOWN LOS ANGELES (KABC) -- Roughly 2,800 inmates are behind bars at the Twin Towers Correctional Facility in downtown Los Angeles, all of them men struggling with mental illness.

In fact, it's the nation's largest mental health facility.

"This has become the way to handle those that don't have the care they need out on the street," said Sgt. Francine Rizzio with the Los Angeles County Sheriff's Department.

But, some good things are happening at Twin Towers. Specifically on the fourth floor, where the inmates who need the most medical attention are seeing real progress.

Some four years ago, inmate Craigen Armstrong was among the general population at Men's Central Jail. After completing a series of education classes, he's now a Merit Master at Twin Towers - essentially a mental health assistant and group leader for a pod of inmates.

"You have guys who are battling schizophrenia. It's very challenging and it's a very severe illness," Armstrong said.

After prison, Susan Burton turned her life around and now helps other formerly incarcerated women reintegrate into society.

"Everyday for them is a struggle, so it's like watching them struggle but being there to assist them whenever they need me and they know they can depend on me," said Adrian Barumen. "So I really enjoy just being there with them everyday."

"They pretty much do everything and they're amazing," said Tong.

She oversees three of the pods and the Merit Masters program. It's been in place for six years but with Armstrong and Barumen, she says the inmates are really responding.

"I know it's working because the violence has gone down. We don't have very many incidents at all. The re-hospitalization has gone down and people are just happier here," Tong added.

So what's different about the program?

"I think it's more just treating them like people," she said.

Tong says Armstrong and Barumen are like big brothers, making sure the inmates take their medication, contribute with chores and engage in group sessions.

Incentives are offered, but Armstrong and Barumen say they focus on creating daily habits and earning their trust.

"(There are) a lot of things that they'll tell us that they won't tell no one else, and so we use that information to help them," Armstrong said.

Surveillance video from the Los Angeles County jail in Castaic shows inmates use Narcan to save the life of a fellow inmate who had overdosed.

The program is going so well, the facility is adding a fourth pod. Armstrong and Barumen were allowed to interview and select the next Merit Masters and they've written a book to share what they've learned.

"When you're seeing something that works and you're in here, the natural human nature is you want to give it to other people so it could help them," said Armstrong. "We know there's other facilities, other counties, other places in the nation that can benefit."

Armstrong and Barumen admit they, too, are benefiting by seeing the deputies in a new light and finding a new purpose for themselves.

"I'm really learning how to feel, I'll tell you that much," Barumen said.