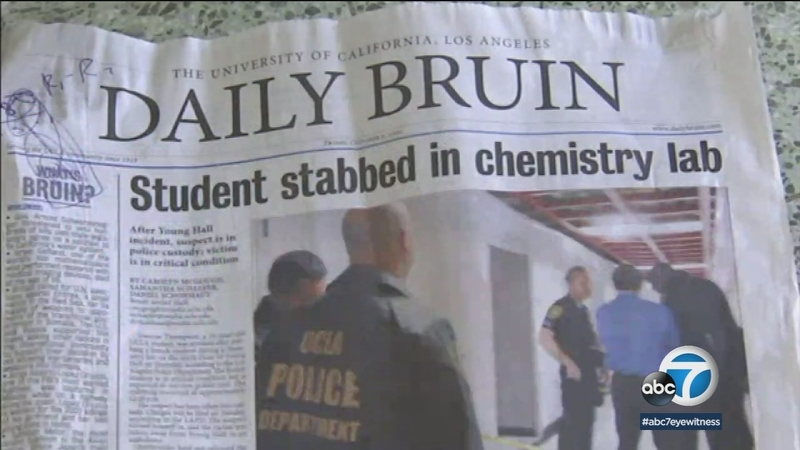 LOS ANGELES (KABC) -- Colleges in California have a responsibility to protect students from foreseeable acts of violence in the classroom and other settings connected to their studies and can be held liable for failing to do so, the state Supreme Court ruled Thursday in a lawsuit by a UCLA student who was stabbed by a classmate.

College campuses are communities where many students are living on their own for the first time, Associate Justice Carol Corrigan wrote for the majority. Colleges have mental health counselors, campus police and resident advisers, impose rules and can monitor and discipline students, she added.

The decision came in a lawsuit against the University of California regents and several UCLA employees by student Katherine Rosen, who was stabbed by a classmate in 2009 during a chemistry class.

Rosen, then a pre-med student, was unaware that her labmate Damon Thompson had been suffering from hallucinations, that he been getting treatment from the university's Counseling and Psychological Services unit and had stopped taking his meds.

He sliced her throat, nearly killing her.

Thompson acknowledged the attack, was found not guilty by reason of insanity and sent to a psychiatric hospital.

UCLA had argued in court that university students should not require the same protection as minor children.

Its opinion states "a reasonable university could for see that its negligent failure to control a potentially violent student or warn students who were foreseeable targets, could result in harm to one of those students."

The university issued a written statement that says in part: "The university is committed to providing an environment that is conducive to learning and that provides appropriate resources to support our students in need."

It is still unclear how broadly the decision will be interpreted.

But for Rosen who is now a doctor in residency, the next step is a new trial.