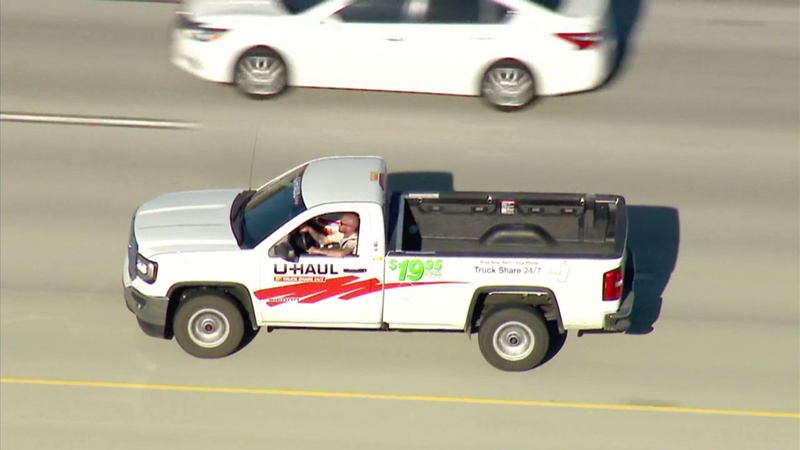 Armed suspect shoots self following chase from OC to IE

CAJON PASS, Calif. (KABC) -- A multi-county police chase ended when an armed suspect shot himself inside a U-Haul pickup truck after one of his tires blew out on an Inland Empire freeway.

The call came from a man at a business in an industrial area. The man said a relative was going to return some guns he'd stolen from the caller in 2017 during a burglary in Fullerton.

The caller said he was afraid something was going to happen, which prompted him to call 911 and asked officers if they could be present to keep the peace during the exchange.

Authorities arrived at the business and found the suspect knocking on the backdoor of the business, asking for the person who called to come out.

As officers approached the suspect, he got into a white GMC Sierra U-Haul pickup truck and drove away. When authorities followed him and tried to pull him over at Brookhurst Street and Lampson Avenue, the suspect complied.

But when authorities tried to give the suspect commands, he took off in the vehicle and started the chase.

Authorities chased him to Anaheim Hills and then handed over the chase to California Highway Patrol. The chase continued through various freeways into the Inland Empire, through Riverside and into San Bernardino County.

The suspect traveled at speeds as high as 90 mph and weaved in and out of traffic in an effort to evade police.

At one point, the suspect hit some traffic as he continued heading in the direction of the Cajon Pass. During that slowdown, the suspect erratically moved through traffic and headed into the emergency lane, flying past slower vehicles.

The front tires burst after possibly hitting a spike strip, which slowed the vehicle down. The suspect struggled to handle the vehicle when the tires burst, but he continued driving on the rims of the tires.

The vehicle stopped along a dirt path, where another person, identified as witness Robert Davidson, was pulled off to the side. Authorities quickly arrived and were able to surround the vehicle and get Davidson to safety away from the suspect.

"By the time I saw the lights coming, I was going to pull off but I just didn't know what was going on so I didn't pull off and I stayed there until they pulled up. It just happened and he came up beside me maybe like 5 yards and that's when it happened," Davidson said.

He said he was inside the car talking to his girlfriend when authorities pulled up and got him out of the vehicle.

At some point, shots were fired and it appeared the suspect in the pickup truck pulled the gun to his head. The driver then appeared to be slumped over in the vehicle as authorities approached the driver's side with K-9s.