Lawmakers have called on the Biden administration to end Title 42.
KABC
By Anabel Munoz 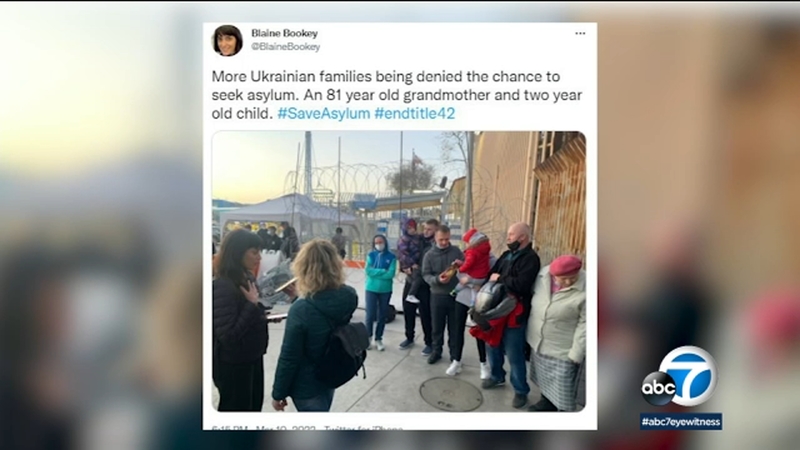 LOS ANGELES (KABC) -- Attorney Blaine Bookey was at the Tijuana, Mexico port of entry as Ukrainian refugees were turned away by U.S. immigration authorities, including an 81-year-old grandmother and 2-year-old child.

"...told that our borders are closed, there are no exceptions, and that they will not be processed," said Bookey.

Bookey is the legal director of the Center for Gender and Refugee Studies. She successfully assisted a family that was initially denied. "A mother with her three children: 14, 12 and six that had fled just a few days after the invasion began," she said.

The challenges that family and other Ukrainians are facing at the U.S.-Mexico border is drawing renewed attention to Title 42. Under the Trump-era policy citing pandemic health concerns, immigration officials can - and do - turn away most families and adults seeking asylum without a chance to present their cases.

"We've seen hundreds of thousands of people expelled to Haiti and other countries and including right back across the border in Mexico, where their lives are at risk," she said.

Lawmakers have called on the Biden administration to end Title 42. In a statement, U.S. Senator Alex Padilla and fellow lawmakers said in part, "...With vaccines and testing widely available, there is no public health benefit to sending asylum seekers back to harm."

Bookey met a Haitian mother and 3-year-old daughter who were denied the opportunity to seek asylum. "Despite the many dangers that they face in Haiti and also in Mexico," said Bookey. "Their daughter has one of the worst skin infections I've ever seen. They've had difficulty diagnosing it," she added.

I hope that the Haitian family I spoke to this week will also have their right to asylum respected. Their youngest daughter has a terrible skin infection that they cannot diagnose. #endtitle42 #defendasylum pic.twitter.com/T6iPCSIWK7

"It's very clear that the Title 42 policy, the intention of President Trump and his advisor Stephen Miller, was to keep out Black and brown asylum seekers that come to the U.S. southern border," said Bookey of the disparate application of the policy.

In the U.S., someone can legally seek asylum regardless of how they arrived or their current immigration status. For those Ukrainian refugees who do make it across the border, the L.A. County Board of Supervisors just unanimously approved a motion to provide them with financial aid, medical support, and immigration legal assistance. Families like Petro, his wife Olga, and their three children. "Our girls, all our children, were underground," Petro told Eyewitness News.

After spending days in a bomb shelter, they fled Ukraine and eventually made it to Tijuana and are now in Los Angeles. While their future is uncertain, their children and work are a priority. "If my children go to school, it's my best dream," he said. A dream that truly begins with first finding safety and refuge.