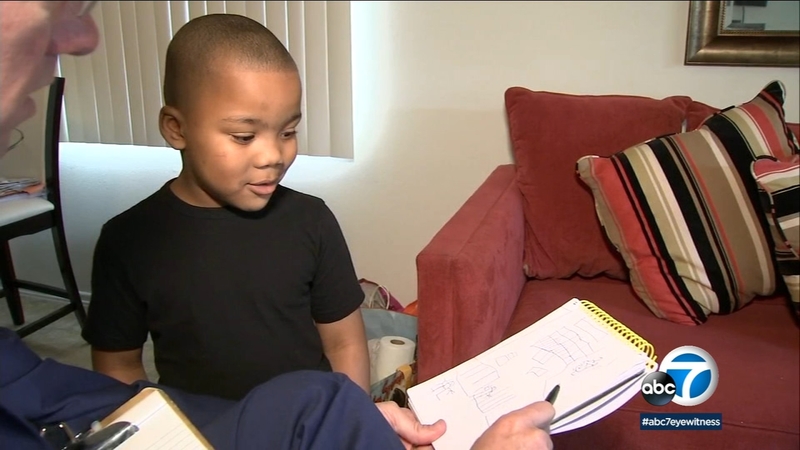 UPLAND, Calif. (KABC) -- Like many kindergarteners, 5-year-old Kyler has plenty of hobbies and interests - and one of his dreams is that he wants to be a policeman.

At least he wanted to be one until an incident last week at Foothill Knolls Elementary School.

"He is a young African-American male and the police being called on him, that hurt me as a mother," his mother, Jenny Kimbell, said.

Kimbell said kindergarten had started out just fine, but then Kyler started getting into trouble.

"He's gotten frustrated. He had struck another kid," Kimbell said.

Then the incident happened last Tuesday.

"It escalated to where Kyler got upset, started flipping desks, throwing chairs," she said.

Kimbell even shot video on her cellphone of the aftermath.

"He'd destroyed the classroom. I was told that this went on for 45 minutes," she said.

During an interview with Eyewitness News, Kyler asked his mother if he could draw a picture of what the classroom looked like after his incident, where he showed that he even threw a chair at a window.

But what upset Kyler's mom was the fact that the school called police.

"Now, when he sees the police he says oh there's the police, you see that police right there? Am I going to be arrested? Now he's telling people, he said, 'The police came to my school, but I didn't go to jail,'" Kimbell said.

The school district provided a statement.

"In this case, the resource officer went to the school's office after receiving a call of a potential incident. At no time did he speak with the student. He was there to provide support, if necessary," the statement said, in part.

But Kyler said the officer did say something to him.

"When we was about to leave he said, 'Make sure to be good,'" Kyler said, adding that he agreed.

Kimbell said the police did nothing wrong, but wonders why they had to be called in the first place.