Remains of US soldier, missing since Korean War, finally back on American soil 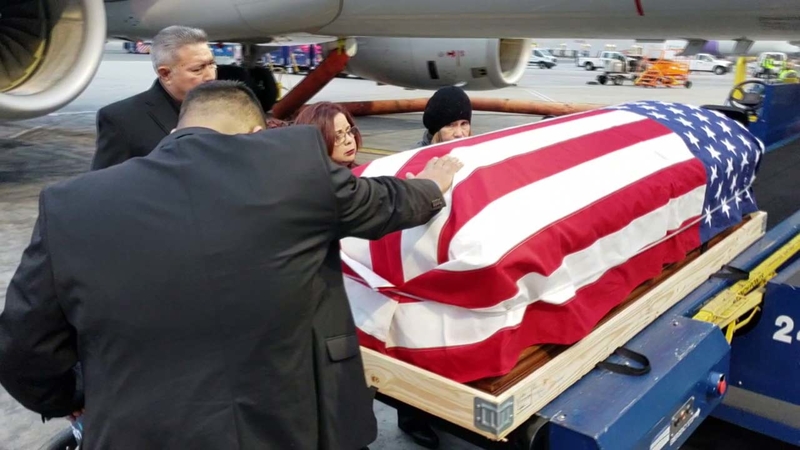 Remains of US soldier, missing for 67 years, back on American soil

LOS ANGELES (KABC) -- The remains of a U.S. soldier missing in action for nearly 70 years have been identified and finally returned to American soil on Wednesday.

Cpl. Albert Quintero was declared missing in action during the Korean War, when he was 23 years old. His unit was overrun by a massive Chinese offensive during the war. It wasn't until 2001 that his remains were found. DNA helped positively identify him and reunite him with his family.

"It only takes a swipe of your mouth, and you can find your relative and you have closure," said Alice Arviso, Quintero's niece.

Quintero's family gathered at the LAX Police station early Wednesday morning for a procession to take them to the tarmac, where they were reunited with Quintero's remains, which arrived in a flag-draped coffin.

"It's just a beautiful feeling. It's a feeling that makes us proud to know that our uncle is finally going to get the honor and the respect that he deserves," said Sylvia Ramos, another niece.

Quintero will be buried at All Souls Cemetery in Long Beach, where his mother is also buried. His family members, who also live in Long Beach, said they will visit often.

"These homecomings are different because these families finally get the closure that is so long overdue and it's a blessing to finally have that closure. Doesn't make it any less emotional. They wish their immediate family was still here to see and have that closure that they deserved so many years ago," said Laura Herzog with Honoring our Fallen, an organization that helps families who have lost military family members.
Report a correction or typo
Related topics:
societylos angeleslos angeles countylong beachmilitarykorean warveteran
Copyright © 2021 KABC-TV. All Rights Reserved.
TOP STORIES
Huntington Beach police shoot, kill man near pier
SoCal family outraged by sentence for drunk driver who killed father
William Shatner, 90, heading to space
Ex-OC sheriff's deputy allegedly stole dead woman's credit cards
Search intensifies for missing NJ woman last seen near Joshua Tree
Costco is limiting how much toilet paper you can buy again
Ex-OC pastor gets 14 years in prison after $33 million fraud scheme
Show More
3 people dead after Amtrak train derails in Montana
California to replace the word 'alien' from its laws
Man attempts to storm cockpit, strangles attendant on JetBlue flight
4 injured in shooting at Willowbrook Metro station
USC investigation: Ex-Song Girls coach body-shamed squad members
More TOP STORIES News