As students return to classrooms across Southern California via remote learning, some marching bands are pushing ahead with the fall season, but entirely off the football field.
KABC
By Rob McMillan 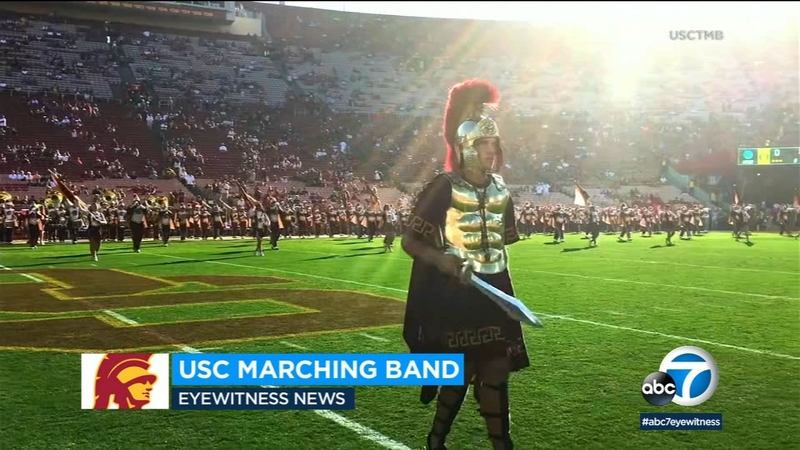 LOS ANGELES (KABC) -- As students return to classrooms across Southern California via remote learning, and football seasons around the area are being canceled, directors of some local marching bands are pushing ahead with the fall season, but entirely off of the football field.

For the marching band at the University of Southern California, it is a vastly different experience than many of them could have ever imagined.

"The spirit and the atmosphere just isn't the same," said USC band manager Alex Da Silva. "The main thing we're trying to do right now is get instruments to everybody, which has been a process and a little difficult."

Band camp for approximately 280 students began this week. And while they would typically have 13-hour days for almost the entire week, with much of the time spent on a football field, they are now conducting practice via Zoom.

"Even though we're apart, we can still send that energy through the camera," said assistant director Sean Jenkins, moments before students started screaming into their microphones to make their presence known.

Of course, they are dealing with some of the same technical glitches people everywhere have been coping with when conducting meetings remotely.

"We all have internet lag; that's understandable," said Jenkins.

It also makes it difficult for teaching staff to hold every person accountable, especially compared with how they would try to accomplish that on a football field.

"I'm looking at the horn section leader, and he doesn't have the music up," said Bartner during the Zoom meeting about one student.

"And one girl is petting her dog."

Many USC band students who live together are already gathering inside their apartments in small groups. But many are still dialing into the remote meetings by themselves; some from computers all over the world.

Because band camp is being done remotely, there is currently less of a focus on producing halftime shows, and more time spent on the actual music and marching techniques. When the band is cleared to return to the football field, band management is considering using special devices for students' instruments, which would allow them to play music together safely.

"It's a bag that goes over the instrument," said Vogel. "It attaches on the barrel, and again at the bell. It's a nylon bag with two holes that you can put your hands in so any of the aerosols coming out of the key holes are then absorbed.

"Basically, it's like a cloth face mask for your instrument."

The PAC-12 has announced the cancellation of all fall sports until at least the end of 2020. The University of Southern California is adhering to state and local guidance to not allow the gathering of groups of students on campus and has decided to hold fall classes online.