Alameda's USS Hornet Sea, Space and Air Museum offers ghostly tour that will give you shivers up and down your spine 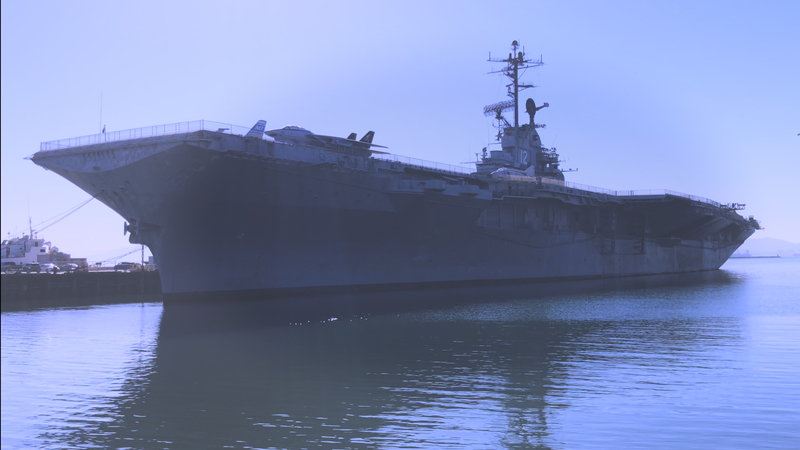 All aboard the USS Hornet for a ghostly greeting

ALAMEDA, Calif. -- Do you believe in ghosts? The USS Hornet in Alameda is filled with history, from World War II to greeting the Apollo 11 astronauts from their return from the moon.

Whether you believe in the paranormal or not, there is no denying the eerie sensation you get when you walk through the corridors of the USS Hornet. If you dare to attend the History Mystery tour, spirits are sure to communicate through electronic voice phenomena or blinking flashlights.

Many docents and visitors have had spine-chilling experiences but what is more intriguing is the amount of history that has happened on the aircraft carrier.

The USS Hornet was built from 1942-1943 in Newport News, Virginia. She was a full-size fast attack carrier in World War II, Pearl Harbor, and the Vietnam War. She had a crew of 3,400 people and her crew set Navy records that will never be broken.

Today, she is docked in the city of Alameda, across the bay from San Francisco.

Like many ships at the end of the war, she was on her way to be scrapped but was saved by the Hornet Foundation and was turned into the museum that she is today.

During the beginning of the restoration process, a painter felt as if he was being watched.

As soon as the painter turned around, he noticed two men in sailor uniforms with faces that didn't have any definition. After having a number of ghostly encounters, the ship hired a professional paranormal investigating team who also experienced plenty of paranormal phenomena.

The USS Hornet Sea, Air and Space Museum offers a number of tours but the popular tour is the History Mystery Tour, an evening tour where the docents take you to eight different locations in the dark.

"You will hear voices and you'll see shadows," said docent Bob Friedman, who has volunteered on the USS Hornet for 16 years. "When I have been here with investigations and we have had a lot of voices through E.V.P.'s (electric voice phenomena) devices, spirits answering questions but I have heard voices out loud too."

The USS Hornet is known to have three different kinds of spirits roaming through the corridors. Residual spirits are described as a playback of a past event that is in a constant loop. Residual spirits cannot see anything around them, living or dead. The second type of spirits are the "intelligent spirits." They can see you and other spirits but what is most shocking is that they can communicate in the afterlife. The third kind of spirits are visitors, who have worked on the ship during their lifetime and spirits who are just passing by.

"Spirits coming to visit us is a good thing, always," said Mike Gordon, docent on the USS Hornet Museum. "I am confident that the spirits are friendly. We always ask our guests to keep an open mind and an open heart and good things will happen."

"I have been working here for almost two years and I have had too many paranormal experiences to count," said Faye Navarro, overnight program liaison. "I have had my face touched on certain occasions and seen shadows like someone is peeking their head. I am never afraid because the way I look at it is I want to help them and get their stories across. I do acknowledge them when I hear them and continue the communication."

The USS Hornet's History Mystery Tour docents use a number of tools to communicate with spirits. An Electric Voice Phenomena (E.V.P.) recorder is used to pickup supernatural sounds and voices. A K2 Meter, also known as a "spirit detector," will flash a light if there is a fluctuation in nearby electromagnetic fields. The most popular used with spirits are the Maglite flashlights that have the twist on and off knob, creating a loose connection.

"Spirits can't push a button so we take the flashlight to where it is just barely off, we turn it on fully and we rotate it back and we set it down gently," said Gordon. "The flashing lights mean that the spirits are able to make a connection. The spirit uses the energy that they carry with them. When a spirit decides to turn it on, it turns on."

During the History Mystery Tour, visitors are encouraged to ask yes or no questions and wait for a response.

"The spirits love to hear conversation and join in," said Gordon. "Once when I was with my friend, we used the E.V.P. device where we go around the room and every answer was "get out" and that's when we said, "We're leaving." And we did leave."

If you are a skeptic or do not want to have a spooky experience, the USS Hornet offers educational and behind-the-scenes tours. If you are willing to kick it up a notch, the museum offers an overnight tour that includes dinner and an investigation that goes into the wee hours of the night.