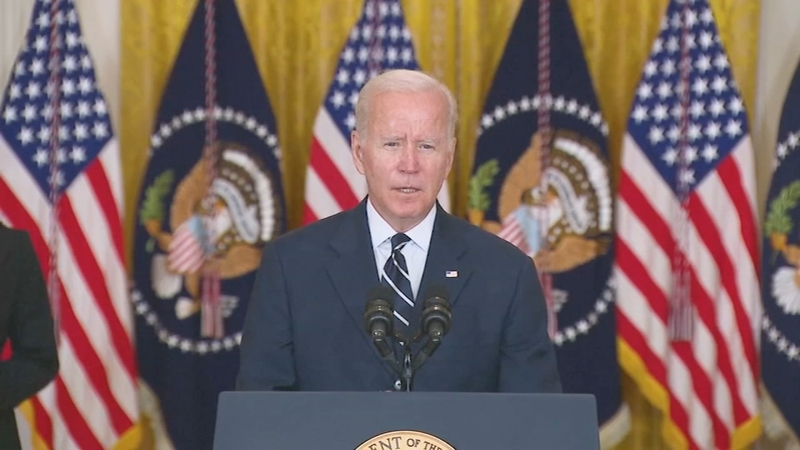 WASHINGTON -- It's likely to become President Joe Biden's most hotly contested COVID policy yet: a sweeping nationwide safety standard for the American workplace that demands large businesses require their employees to either get the vaccine or test regularly.

The temporary emergency rule would apply to every U.S. private business that employs 100 workers or more -- from grocery clerks to meatpacking plant employees -- impacting some 80 million Americans.

It would be the first time Washington has set a federal standard that regards a respiratory virus as an occupational hazard outside of the health care sector, essentially putting COVID in the same category as other workplace safety concerns as asbestos and dangerous machinery.

Details were expected to be released as early as Thursday on the rule, drafted by the Labor Department's Occupational Safety and Health Administration, or OSHA.

"It's the biggest thing OSHA has ever done in terms of the number of workers it will cover," said Jordan Barab, a longtime top official at the agency during the Obama administration.

Union and industry groups say they have yet to see a draft of the new rule. Among the most pressing questions is when employers would have to comply, with Republicans warning that mandates ahead of the holidays might exacerbate the nation's worker shortage.

It's also unclear how long the temporary standard would be in place and if it would apply to short-term "gig" workers, like freelancers and Uber drivers, or smaller franchises that are part of nationwide chains, like small restaurants or gyms.

How employers will be expected to enforce the standard is another question mark.

"We don't know what they're looking it. It's a black box," said one industry official involved in recent discussions with the administration.

President Joe Biden urged newly eligible Americans to get their COVID-19 booster shots in a speech from the White House Friday.

Since taking office, the Biden administration had avoided imposing nationwide vaccine mandates, focusing instead on incentives for businesses and individuals. But with the arrival of the delta variant, a surge in pediatric cases and pockets of the country remaining hesitant to get a shot, Biden's COVID strategy shifted in recent weeks.

"We've been patient, but our patience is wearing thin. And your refusal has cost all of us," Biden said of unvaccinated Americans on Sept. 9 when announcing his plan to draft the rule.

Testing for these workers is not an option.

Biden also has required that health facilities like hospitals and nursing homes that accept federal dollars mandate vaccines for their workers, a total estimated at 17 million workers.

The latest OSHA rule would significantly expand that pool of Americans, putting two-thirds of the nation's workforce under a kind of mandate.

Once divided on how to address the pandemic, Republican governors have united against the plan, insisting it represents dangerous federal overreach and would cripple business owners already dealing with worker shortages.

"Rest assured, we will fight them to the gates of hell to protect the liberty and livelihood of every South Carolinian," tweeted the South Carolina GOP Gov. Henry McMaster last September following Biden's announcement.

Supporters counter that many large businesses have already embraced vaccine mandates to both entice employees who want a safe workplace and end a pandemic that has hobbled the economy. They argue too that whenever employees have enacted mandates, the vast majority of workers comply.

"This is not a vaccine mandate. It's a safe workplace mandate -- getting vaccinated or tested," said Barab, the former deputy assistant secretary of labor for OSHA.

"You want to do it as soon as you can to protect as many people as you can," he added.

A Labor Department spokesperson and the White House declined to discuss the specifics of the rule ahead of its release, other than to confirm that the White House's Office of Management and Budget completed its regulatory review on Monday.

"The Federal Register will publish the emergency temporary standard in the coming days," a Labor Department spokesperson said.

As an emergency standard, the rule would take effect immediately. But the administration was widely expected to give businesses at least some time to comply, although it's not clear how long. Several industry groups were pushing for a 60-day implementation period that would push any enforcement into 2022.

The rule was expected to call on employers to give workers time off to get the shot and recover from any side effects.

It's unlikely that workers would be required to get booster shots -- at least as of now. The Centers for Disease Control and Prevention considers a person "fully immunized" as one shot of the Johnson and Johnson vaccine or two shots of Moderna or Pfizer. CDC officials warn, however, that definition could change as new research develops.

Last week, Bloomberg reported that the rule also would allow employers to force workers who refuse to get the COVID shot to pay for any weekly tests and masks.