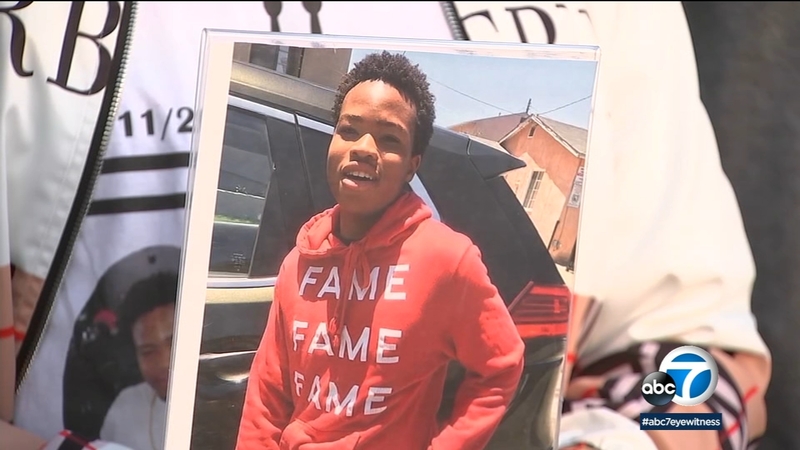 VAN NUYS, Calif. (KABC) -- Heartbroken family and friends gathered Sunday for a candlelight vigil to remember a man shot and killed outside a strip club in North Hills.

The shooting death of 20-year-old Gabriel Kalechi Isiguzo happened in March but the killer is still on the run.

Isiguzo's devastated mother appealed for help to find the man who killed her son, the youngest of four children.

"Gabriel is gone. He can't come back but we need justice for Gabriel and other gun victims," said Uloma Anyanwu.

Family members describe Isiguzo as a happy and caring person. He loved music and played the drums at church.

"He has seen things in life, challenges, but he always believed there's always a brighter picture," Anyanwu said. "And he put that energy in his music."

"The smile that you see in all these photos, most of them, that was pretty much consistent with him," said Isiguzo's aunt, Alicia Whitman. "He was a good person."

Isiguzo was fatally wounded in the parking lot of Synn Gentlemen's Club in North Hills on March 7.

LAPD looking for a suspect who allegedly shot and killed a man outside a strip club in North Hills following an argument.

He drove to the club to pick up his girlfriend who worked there. He was waiting outside when police say a man came out and they exchanged words.

Investigators say the suspect walked away and got into a car, shooting the 20-year-old as he drove away.

Isiguzo died after being rushed to a hospital.

"My son did not know the suspect, never had any relationship or any encounter with the suspect," Anyanwu said.

Police are still searching for the suspect, identified as 38-year-old Savin Seng.

"I really hope that whoever knows where the murderer is at that they turn him in immediately," Whitman said. "He does not deserve to be walking the streets. He's dangerous to everyone."