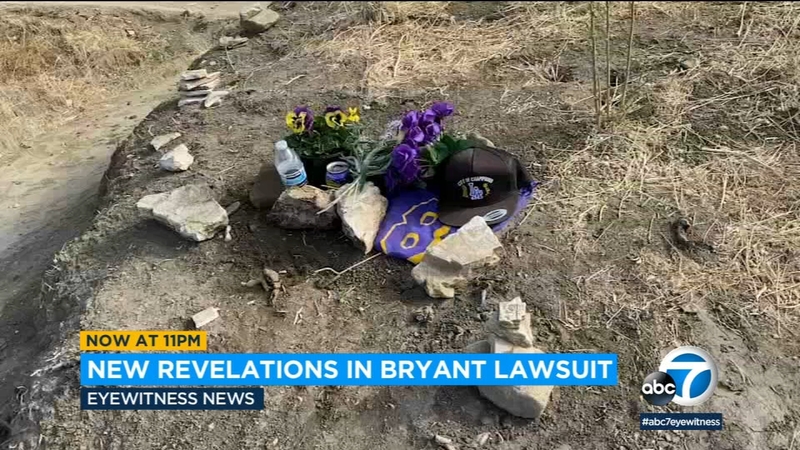 LOS ANGELES (CNS) -- The names of four Los Angeles County sheriff's deputies alleged to have shared unauthorized photos taken at the site of the helicopter crash that killed Kobe Bryant, his daughter and seven others were released publicly and added Wednesday to Vanessa Bryant's civil rights lawsuit against the county.

A Los Angeles federal judge ruled last week against county attorneys who argued the deputies' names should remain under seal because releasing them would make their personal information including their addresses accessible online, and possibly make them targets of hackers.

Along with the county and its sheriff's and fire departments, the updated suit adds deputies Joey Cruz, Rafael Mejia, Michael Russell and Raul Versales as defendants.

Los Angeles County Sheriff Alex Villanueva late Wednesday tweeted a brief response to the release of information from Vanessa Bryant: "We will refrain from trying this case in the media and will wait for the appropriate venue. Our hearts go out to all the families affected by this tragedy."

Kobe Bryant, his 13-year-old daughter Gianna Bryant, and seven others died Jan. 26, 2020, when the Sikorsky S-76B they were in crashed onto a hillside in Calabasas.

The National Transportation Safety Board investigation into the crash found that the pilot, Ara Zobayan, became disoriented while flying in thick fog. Zobayan also did not follow training and violated visual flight rules, the investigation found.

Calabasas residents recall the tragic morning when the helicopter that carried Kobe Bryant, his daughter Gianna and seven others went down.

According to the complaint, Mejia obtained "multiple photographs of the Bryants' remains'' from fire department personnel taken at the scene of the crash, "and stored them on his personal cell phone."

"Mejia told the deputy that he had photos of the accident scene and, for no reason other than morbid gossip, proceeded to send the photos of the Bryants' remains to her personal cell phone,'' according to the lawsuit.

According to the suit, while at the Lost Hills Sheriff's station on the evening of the crash, Cruz told fellow deputy Russell that he had photos of the Calabasas accident scene.

Russell asked to see the photos, and Cruz texted photos of the Bryants' remains to Russell's personal cellphone, according to the suit.

The same day, while at the Baja California Bar and Grill in Norwalk, Cruz allegedly "boasted that he had worked at the scene of the accident where Kobe Bryant had died. Cruz then showed photos of the Bryants' remains to a fellow bar patron and the restaurant's bartender, and he is seen on the bar's security camera zooming in and out of the images while displaying them to the bartender," according to the suit.

"One of the photos showed the body of a girl, and Cruz remarked that another showed the remains of Kobe Bryant," the suit states. "Shortly after seeing the photos, the bartender loudly boasted to restaurant employees and patrons that he had just seen a photo of Kobe Bryant's body and described the image in graphic detail.''

Versales, who had also allegedly obtained the photos, sent the images to a detective at LASD, the suit states. As an indication of how casually the photos were shared within the department, "the detective could not even identify the name of the deputy who sent him the photos," the suit contends.

After learning that a complaint had been filed with the LASD regarding improper sharing of photos of the victims' remains, Mejia, Cruz, Versales and Russell "negligently and/or willfully destroyed evidence" by deleting the photos from their cell phones, according to the complaint.

By doing so, Mejia "severely undermined the ability to verify any of his claims regarding his handling and dissemination of the photos," according to the lawsuit.

In reality, however, no fewer than eight sheriff's deputies were at the scene snapping cellphone photos of the dead children, parents and coaches," the lawsuit states. "As the department would later admit, there was no investigative purpose for deputies to take pictures at the crash site. Rather, the deputies took photos for their own personal purposes.''

"We're not going to try this in the media. We'll wait till the final judgment, the case is settled and we're going to release the entire investigative file," Villanueva said in a Skype interview with Eyewitness News. "We're going to post it online so that everybody can see everything we did and all the steps we took to ensure privacy."

Bryant is seeking damages for negligence and invasion of privacy.