How do you address the increase in teen vaping? Start with smoke shops near schools 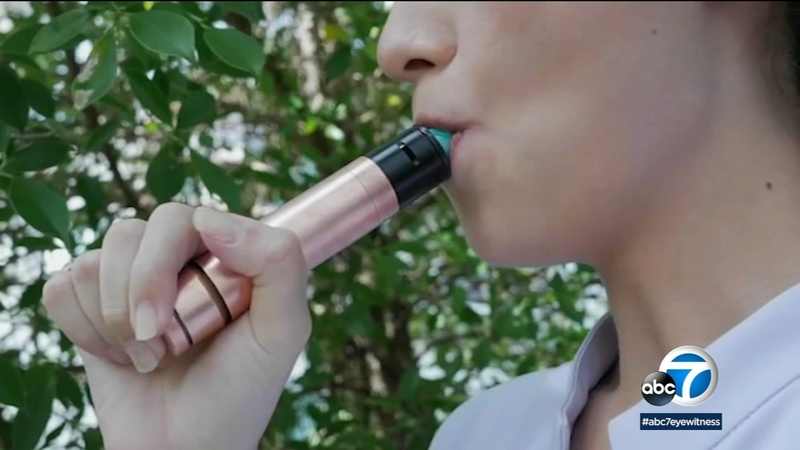 How school administrators are trying to tackle increase in teen vaping

Vaping among teenagers continues to skyrocket and now school administrators are fighting back.

In 2020, e-cigarettes were used by almost 20% of high school students and 5% of middle school students across the nation, according to a report by the U.S. Centers for Disease Control and Prevention.

The San Fernando Partnership, a non-profit dedicated to drug-free communities, has been trying to learn why - and it might be location.

"We were alarmed to find that 78% of the schools in the city of L.A. are close to a smoke shop," said Executive Director Albert Melena.

"It was school administrators, school principals and teachers that really were the ones that sounded the alarm, and are literally begging for help," he added.

"I had two tobacco shops directly across the street from my campus," said Dr. Violeta Ruiz, the principal at Santee Education Complex in South L.A., one of 19 schools in the Partnership for Los Angeles Schools' network

Since there are no zoning laws to regulate where a tobacco retailer can operate, kids on the way to school walk by licensed retailers in Los Angeles every day.

A former teenaged e-cigarette user who underwent a double lung transplant is speaking out, warning others to stop vaping.

We reached out to City Attorney Mike Feuer's office for an interview, but were only given a statement which said in part: "There is nothing that our office can do as to enforcement regarding a tobacco retailer operating near a school."

Dr. Ruiz remains undeterred and her efforts might be a blueprint for other administrators. She works with multiple agencies to make sure retailers in her neighborhood are operating properly. In fact, one tobacco shop has been closed, now replaced by a new business across the street from school.

"Upon investigation of the different agencies, the shop didn't have a license. And so they had to apply for a license. And in that mix of them applying to the license, they shut down," Ruiz added.

She also recruits school parents and students to participate, encouraging them to report illegal sales of tobacco which would then put a tobacco license at risk.

"She is working hard to keep our community safe and I feel like a lot of other principals in different schools can learn from her," says senior Kaylee Johnson.

Catalina Juarez is a parent of a ninth grader at Santee and spoke to Eyewitness News in Spanish: "I think that what she is doing as a principal and trying to rid the tobacco for being close to the school site, is very important for us."

There are some who want, at the very least, a moratorium on any new smoke shops close to schools, but without new legislation, Dr. Ruiz will continue to fight what others see as an uphill battle.

"Some might say it's a lot of effort but when you have that passion and that dedication to the community, those relationships, your families and your students, it's possible."