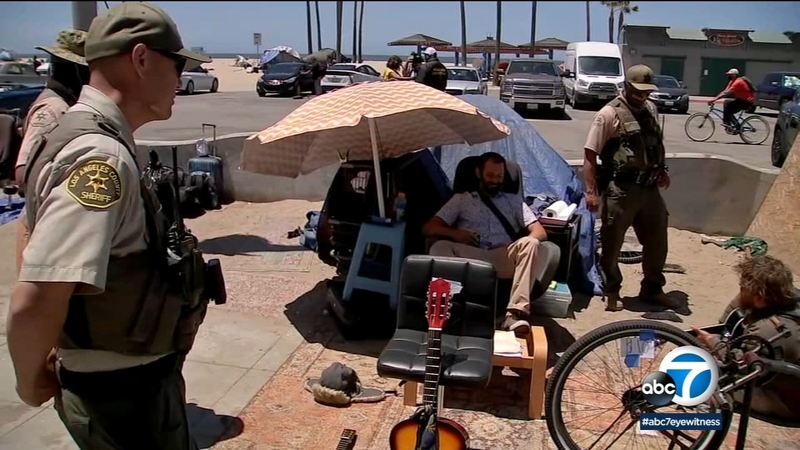 VENICE, LOS ANGELES (KABC) -- Los Angeles County Sheriff Alex Villanueva is blaming the mayor and the Los Angeles City Council for a growing homelessness problem in Venice and is promising to handle it himself - even though law enforcement in that community is the responsibility of the LAPD.

"If you handcuff the local law enforcement, in this case the Pacific Division of LAPD, to not enforce the rule of law, bad things happen," Villanueva said Wednesday. "So we're taking action."

The sheriff on Tuesday ordered 16 deputies who are members of his department's Homeless Outreach Services Team - H.O.S.T. - to begin patrolling the Venice boardwalk.

The move has sparked an angry backlash from LA City Councilmember Mike Bonin who represents Venice. He says Villanueva is exploiting the homeless for political gain.

"That's a cute stunt," Bonin told Eyewitness News. "You can certainly house people more cheaply and a lot more cost effectively without the middlemen with guns."

But under Bonin, the number of unhoused people in Venice has continued to grow, as have homeless-related fires, fights and shootings.

A political spat is brewing as Los Angeles County Sheriff Alex Villanueva sends deputies to patrol the boardwalk and beach in an effort to crack down on Venice's growing homelessness problem.

Villanueva says blame for the problem rests with Bonin.

"If you did your job, I would never be in Venice," he said.

Venice residents we spoke with are glad to see the deputies on the boardwalk.

"I welcome the sheriff 100%," said Venice resident Colin Gibbons. "It's been great that they've come in here and that they're doing something that Bonin should have done a long time ago that he never did."

Villanueva says it's important for the homeless to know that the law in Venice will be enforced and urged those people who came from outside the area to pack up and leave.

"The people that come from out of state here, to set up shop in LA County because they think everyone here is a fool and we're giving away free condos and free everything, well, word to you: We're coming for you," said Villanueva.

"LA cannot be the receiving body for the entire nation's homeless. We're going to be overrun. It's going to destroy our community."