Here's how this futuristic, 95,000-square-foot vertical farm would bring fresh leafy greens and jobs to Compton 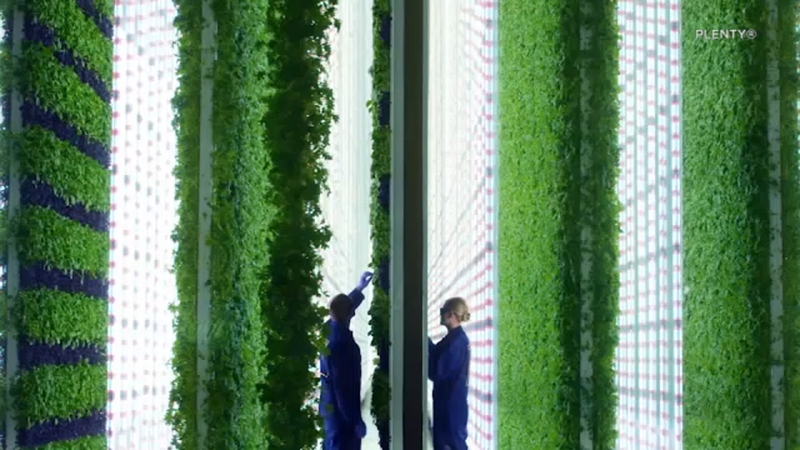 COMPTON, Calif. (KABC) -- When we talk about farming, we don't often think of Compton. But the future of farming could soon be coming to life there.

A company is building a massive vertical farm: that would save water, land and eliminate the need for pesticides.

The vertical farm, which is still under construction, in Compton will be at an unassuming 95,000-square-foot warehouse. When it is up and running, the interior will look like something out of the future - complete with robots, rows and rows of vertical crops, and LED lights to replace the sun.

"They're kind of the new version of the tractor...one of the cool things about vertical farming is that it takes farming out of the country and brings it into the city," described Dr. Nate Storey, the chief science officer and co-founder of the vertical farming company Plenty.

Plenty says the vertical farm will have the capacity to produce 365 harvests per year of high quality leafy greens.

"From day one, it's perfectly controlled...We don't use pesticides, there's no birds flying over our field pooping on the produce, there's nothing to wash off, it's usually not touched by human hands ever, and so we have a safe, clean product that is ready to eat right out of the package." Storey said.

Aerofarms, a sustainable indoor agriculture company, is on a mission to transform eating habits and provide communities with safe and nutritious food.

Now, their latest location is under construction right here in the Southland, in Compton.

"It's a community that I think is going to really enjoy both the jobs that we're bringing and the opportunity to engage in agriculture. It's part of their tradition," Storey said.

"To have a Vertical farm that has the ability to produce organic fresh fruits and vegetables with little space and a little bit of water is just incredible, and I believe their mission to combat food insecurities is right in line with our vision that we have for Compton," said Compton Mayor Aja Brown.

Kale, arugula, fennel and bok choy will be the first crops grown at the Compton warehouse. Already, 420 Southern California grocery stores are on board for regular deliveries, Albertsons among them.

Plenty hopes to deliver direct to local restaurants. The company says its end game is to get more fresh produce to consumers, especially those in communities with limited access.

Plenty wants to build 500 vertical farms around the world, but the focus now is on the Compton facility. Construction has been delayed by the pandemic. The Compton vertical farm is scheduled to deliver its first crops in early 2022.