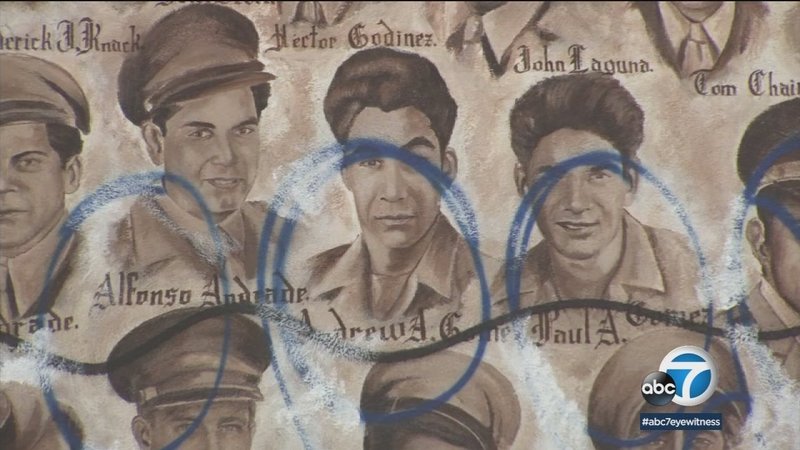 SANTA ANA, Calif. (KABC) -- If you look closely at one of the exterior walls of the La Chiquita Market in Santa Ana, you will see dozens of faces and names that were hand-painted by one man: Carlos Aguilar.

He knows the story of every face, mostly Mexican-American veterans who fought for the United States, many of them with roots or relatives in the city.

The construction worker spent five years and his own money painting the "Heroes Among Us" mural.

"They went and died in places they never heard of before so this is just a small contribution for me to pay homage to those people," he said.

The mural has become a source of pride for the neighborhood and a place where thousands of students have come to hear about the brave men and women who served in World War II and Vietnam.

"It's beautiful (for) my students to see a living representation of who they are, to be able to understand that their faces matter within the community," said Rodrigo Valles, a professor at Santa Ana College.

But in the last month, the mural was vandalized twice. Graffiti stretches across the faces of several veterans.

"I was very devastated because you know it makes our community look bad, we're not about that," Aguilar said.

His attitude is what rallied the community behind him. Students at Santa Ana College started a GoFundMe page to help Aguilar fix the mural.

On Thursday, the Santa Ana Police Officers' Association gave him a check to begin restoring his work.

"What it means to be part of this community, the pride and how we're going to come together, not only as the police department but with the community to make this right," said Santa Ana police Chief David Valentin.

Several officers have family members on the wall. Now, this devoted artist can get back to honoring them with his talents.

"Overwhelmed. There's no words to describe the feeling I have," Aguilar said.

Aguilar said with more help, he'd eventually like to expand the mural to the front of the building to include more veterans.