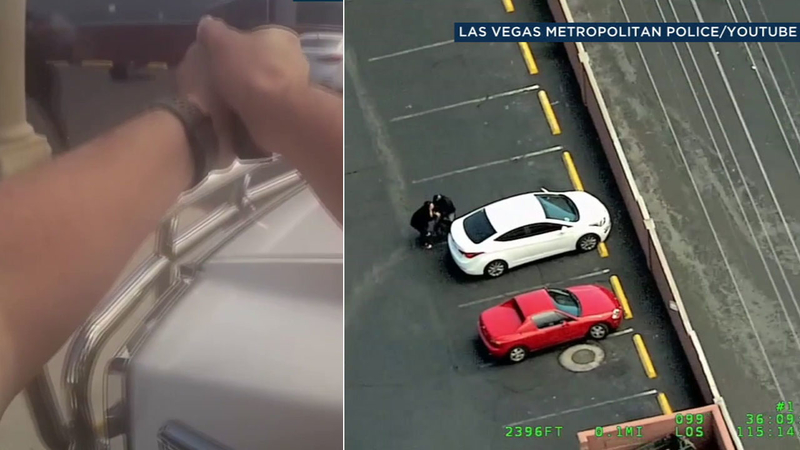 In the video, a hostage disarms the suspect, giving officers just enough time to stop him before he opens fire. The suspect in the Monday event was well armed, violent and showed no regard for human life.

Police fired 10 times at 27-year-old Mario Trejo, who had just robbed the store and took an employee hostage. Police say he chose the wrong person.

"The victim reached out, grabbed Trejo's gun and pulled it down toward the ground, causing the firearm to discharge," said Las Vegas Metropolitan police Asst. Sheriff Brett Zimmerman.

"The victim pulled the gun out of Trejo's hands, ejected its magazine, threw the firearm on the ground and ran back toward the business," Zimmerman added.

Trejo can be heard on officer's body cameras groaning in pain on the ground.

Officers are then heard shouting, "Drop it! Drop the gun!"

The second gun is the reason officers opened fire. Once the hostage took his handgun, he can be seen reaching for another slung over his shoulder.

In one video, an officer appears to just barely miss the hostage as she ran for cover.

"If you see very quickly as she's running by, he raises his weapon to let her get by and then engages the suspect again if he's going to fire," Zimmerman said.

Three officers opened fire. Trejo was hit once in the chest and taken to a hospital.