VIDEO: Man dragged by own car in Silver Lake carjacking 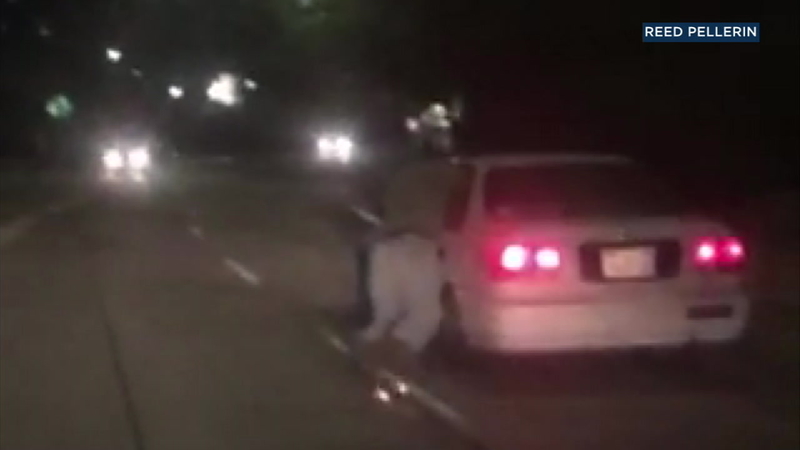 VIDEO: Man dragged by own car in Silver Lake carjacking

SILVER LAKE, LOS ANGELES (KABC) -- A man helping a fellow driver with a flat tire ended up being dragged by his own car after a suspect jumped into the vehicle and took off - with the good Samaritan still holding on.

The disturbing scene was caught on video.

In video shot by witness Reed Pellerin, sparks are seen shooting from the back of that man's steel-toe boots as the car speeds down Silver Lake Boulevard, near Virgil Avenue in Silver Lake Monday night.

The car is going about 35 mph as the man hangs onto his own car and tries to prevent it from being carjacked.

"The right side of his body was in the back window on the driver's side. He was holding onto what appeared to be the seat...," Pellerin said.

Pellerin, who just moved to Los Angeles from Oklahoma, said he saw it happen while he was in his own car and recorded the incident.

"Hear some arguing going on behind me in the lane over, so I look back, I can't quite tell what's going on. I could tell a couple of people are out of their car, and the next thing I know the guy is just flying past me -- the thief in the vehicle and the owner hanging out of the vehicle," Pellerin added.

He said the car dragged the man three quarters of a mile. Eventually, the man lost his grip as the vehicle continued on. Pellerin stopped and called 911.

"He was panicked. He was like adrenaline pumping. He was just looking for his glasses. He was moving around. I mean, his face was all bloody," he said.

According to the LAPD, the victim had originally stopped to offer help to another driver who had a flat tire. He left his keys in the car and that's when the suspect jumped in.