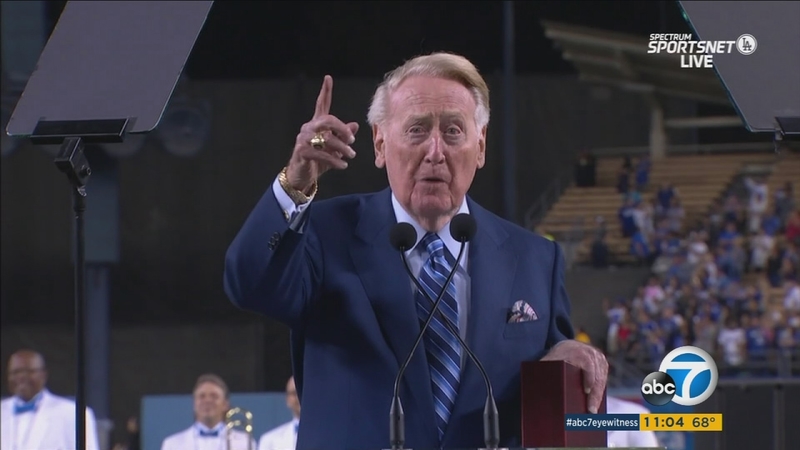 ELYSIAN PARK, LOS ANGELES (KABC) -- Days before Vin Scully's 67-year career as a Dodgers broadcaster comes to a close, the legendary voice of the ball club was honored Friday evening in a pregame ceremony at Chavez Ravine.

The sellout crowd gave Scully a three-minute standing ovation before he took to a podium in the infield and delivered his signature welcome: "Hi everybody, and a very pleasant good evening to you."

While Friday was dubbed Vin Scully Appreciation Day by the team, the iconic play-by-play announcer also expressed his own gratitude to the Dodger faithful.

"There is one group I really feel I must thank - you people sitting in the stands," Scully said. "When you roar, when you cheer, when you are thrilled, for a brief moment I'm 8 years old again."

With Scully's final game as a Dodgers broadcaster scheduled for Sunday, he made note of his plans for the future.

"When you're 89 and they ask you what your plans are ... I'm going to try to live," he said to laughter and applause.

Los Angeles Mayor Eric Garcetti presented Scully with the key to the city, and Major League Baseball presented the sportscaster with an oversized check for $50,000, representing a donation in his name to the Jackie Robinson Foundation.

Composer John Williams and former Dodgers pitcher Sandy Koufax, each a legend in his own right, also paid tribute to Scully. Williams conducted an orchestra that played the national anthem.

Kevin Costner, star of such films as "Field of Dreams" and "Bull Durham," thanked Scully on behalf of countless baseball fans.

The first 50,000 fans to arrive at Dodger Stadium on Thursday evening each received a copy of a heartfelt thank-you note from Scully. One of them was Marty Doginoff.

"Everything I know as far as watching and listening to the game came from Vinny," Doginoff said.

Elizabeth Vigus wondered who will take up Scully's mantle.