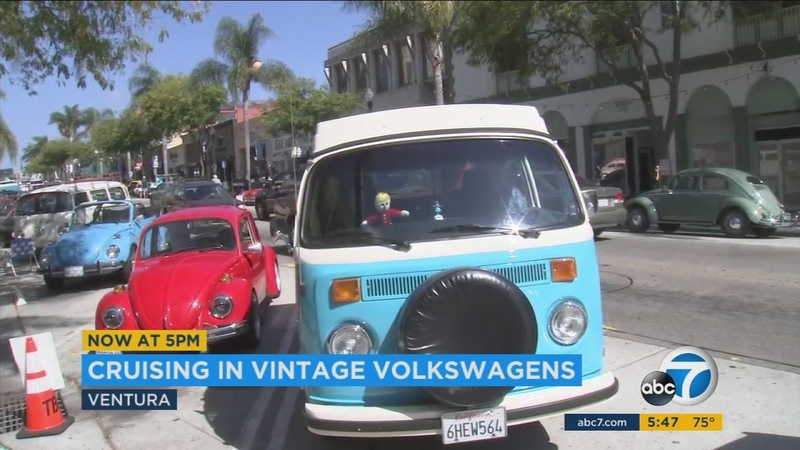 VENTURA, Calif. (KABC) -- Dozens of classic Volkswagen vehicles made a pit stop in Ventura Friday afternoon as the proud drivers made a summer road trip down the West Coast to the Mexico border.

"It's 11 days and we're doing 1,700 miles. We started in Port Angeles, which is directly across from Vancouver Island and we're going to end in Friendship Park in Chula Vista," said Scott Dempster, organizer of the ride called "Treffen," which is German for meeting.

The rules for the trip are pretty loose. If Volkswagen owners want to join in the road trip, the vehicle just needs to be vintage with an air-cooled engine in the back. Beetles, buses and Karmann Ghias have all come along for the drive.

"We've had a couple of people who didn't even know about it see us go by and join us," Dempster said.

ABC7 car specialist Dave Kunz joined in the fun between Santa Barbara and Ventura, piloting a 1967 bus owned by Volkswagen of America, which is helping sponsor the road trip.

It only took a few miles before Kunz realized the appeal of taking it slow, hearing the purr of the flat-four engine in the back and enjoying the view of nearly everyone waving or giving a thumbs-up.

For many, the vintage German cars are about great American memories, and some people have owned them longer than others.

"I've had mine since 73, when I was a student at Ventura College. I got married, I still had it. I've had two boys, they drove it. I still have it. It's still in one piece," Beetle owner Betty Roina said.

The group stayed in downtown Ventura until 10 p.m. They will be in El Segundo at the Automobile Driving Museum between 11 a.m. until 1 p.m.